Product description: Café Racer 15™ features aromas of bright citrus and resinous pine from the generous use of Citra, Amarillo, Cascade and Chinook hops which are complimented by a dry malt finish. The result is a high revving Double IPA that is loud and assertive, much like the rebellious street racers who inspired it. Never ride alone… Hops: Citra, Amarillo, Cascade, and Chinook. Malts: 2-row barley, honey. Yeast: BRBC Ale Yeast. 9.75% ABV, 100+ IBUs. 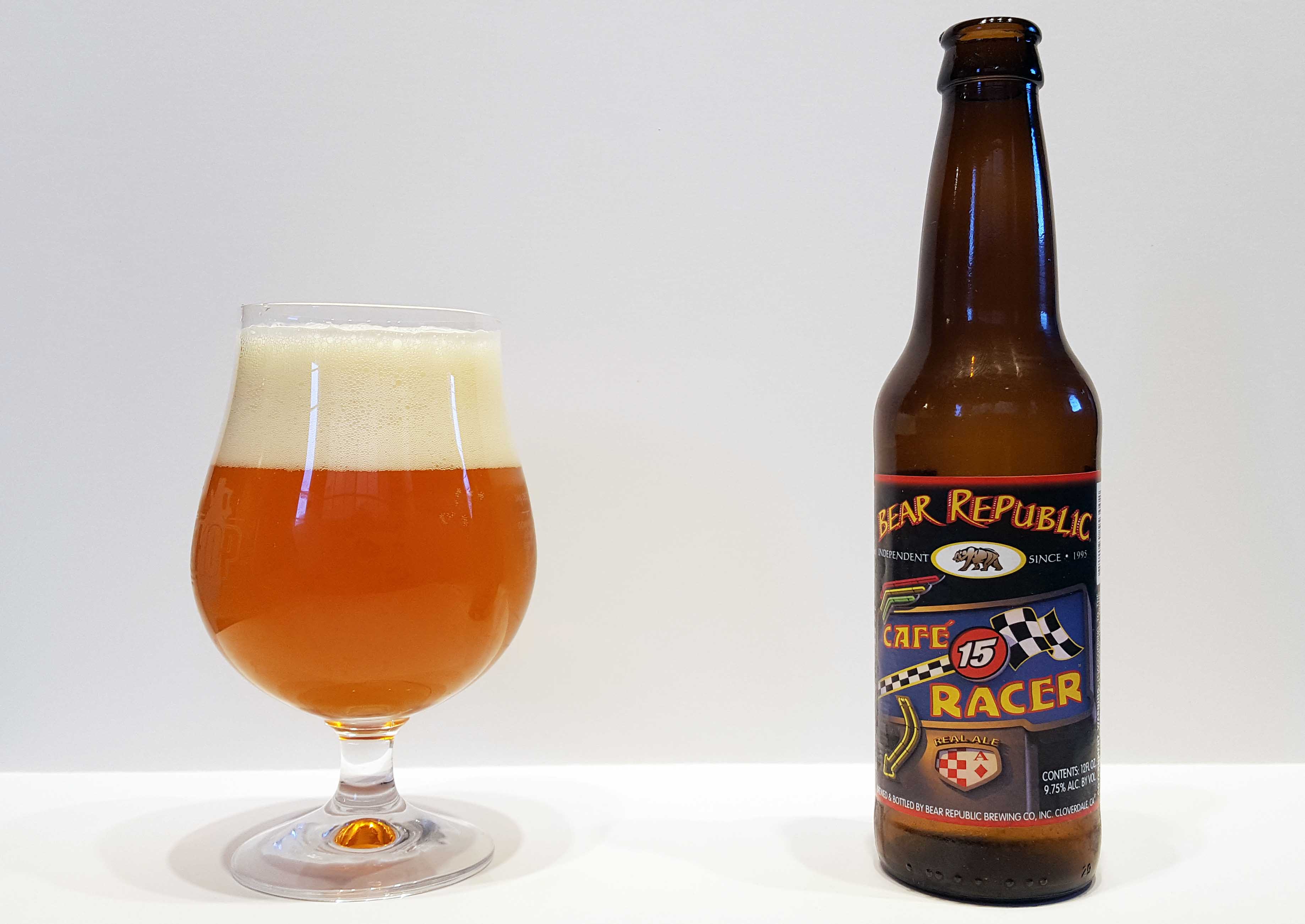 It’s not immediately clear on the Bear Republic website, but Cafe Racer 15 is actually a January-March seasonal. This beer debuted in 2011 as a tap-only specialty and then was offered in bombers for limited distribution starting in 2013. But it wasn’t until last year that it hit distribution in six-packs.

I sampled this from a 12oz bottle with no bottling date to be found. Into the tulip glass, Racer 15 is hazy, dark orange/medium amber in color with towering yellow foam that persists for several minutes. As it warms, the beer clears up all the way.

The aroma starts with bright and zesty grapefruit peel with touches of detergent as it warms. With the first few sips, the body is dense as expected with prominent sweetness sitting at a 6 out of 10 intensity-wise. In the mid-palate, powerful grapefruit rind builds up to something a bit overboard. The mouthfeel can’t keep up and the beer becomes rough and abrasive. Tea flavors end up overtaking minuscule toffee, so the balance isn’t quite there. What you are left with is a dangerous mix of high alcohol, high bitterness, and not enough base maltiness for balance. Even though I wasn’t able to confirm the bottling date on this, I’m trying the 2018 seasonal release (Jan-Mar) and reviewed this on February 4th. At the most, this is a month old. But it already tastes stale to me with a familiar tea-like mouthfeel that I dread from dark orange-focused, amber IPAs.

In my opinion, this beer is simply outdated. There are few old-school DIPAs out there that can do it right like Bell’s Hopslam and maybe Stone Ruination. Today, great Double IPAs have much brighter hop aromas, are lighter-bodied, easier to drink, and don’t punish your palate with 100+ IBUs. The experience with this beer is one of “I thought we were done with this already.” It doesn’t just stop there, however. Bear Republic needs a major facelift: new logo, new fonts, new labels, new recipes, new website – the works. Currently, the design language on store shelves and online is well behind the curve.