Product description: We’ve always believed the best way to respect tradition is to brew the unexpected. So when we set out to create a sessionable lager befitting of the Pacific Northwest, our sense of exploration led us to this dry-hopped wonder befitting of everyday adventure. Citrusy Mandarina Bavaria hops combine with the crisp, bright character of a traditional lager to deliver a beer that is truly refreshing, and undoubtedly worth sharing. Malt: Pilsner. Hops: Hallertau Herkules, Hallertau Mittelfruh, Mandarina Bavaria. 5.5% ABV, 40 IBUs. 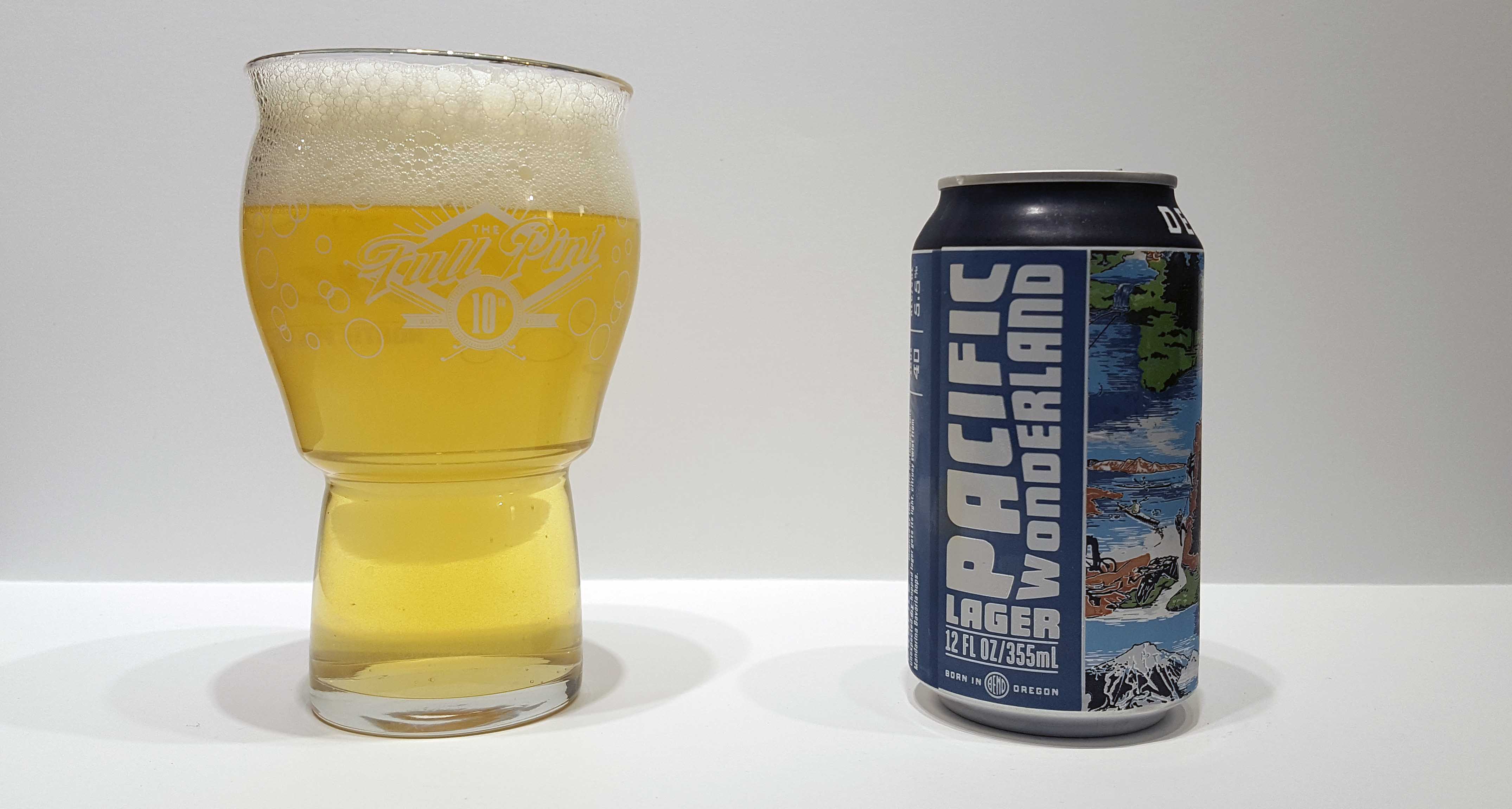 Pacific Wonderland debuted a little over two years, but what is new for this year is the 12oz can format. Currently, only three beers in the Deschutes portfolio are canned: Fresh-Squeezed IPA, Mirror Pond Pale Ale, and this. It’s a move that is perhaps a little late, but these cans look fantastic. One look and it seems like these cans have been around for years. You have large font, vertical lettering for the brand name, which takes up less than a quarter of the can while more than half of the can is then taken up by top to bottom original artwork. I love the modern and outdoorsy design language, which is fitting for Bend, OR.

Into the glass, Pacific Wonderland is crystal clear pale straw with high carbonation that powers a densely-bubbled head of bleach white foam. Surprisingly, there is some yeast sediment at the bottom of the can, which adds millions of microparticles that just float in suspension within the beer, but doesn’t cloud the beer any significant amount.

The aroma is outstanding with candied lemon, orange blossom, and wet sourdough. As it warms, fresh bread and orange blossom honey dominate. I find myself going back to smelling the beer just for fun. Digging in, this beer does justice to the German-inspired recipe. Higher carbonation plus high minerality give this a sparkling water type of refreshing character. Then, a tangerine type of citrus doubles up with fresh sourdough character to provide excellent sweet and sour play on the palate. You get this wonderfully clean body from beginning to end with medium but firm bitterness that persists throughout the experience. Thankfully, the pilsner malt isn’t too expressive like in some American pale lagers, which can give a creamed corn flavor from DMS.

Bitterness ends up being a 5 out of 10 intensity-wise while sweetness is at a 2 out of 10. It’s just a perfect every day after work beer or lawnmower beer. In many ways, this is more pilsner-like than many beers marketed as pilsners on the shelf. The body is light but not watery. Bitterness is firm but not overdone. The finish is dry but not papery or chalky. Sugar is just enough to let flavors pop but isn’t sticky or cloying. Alcohol is a non-factor throughout. Pacific Wonderland is a masterpiece of balance and subtlety.

Though many craft beer lovers will pass on this in favor of Deschutes’ dark beers and IPAs, the truth is that this is one of the best beers they’ve ever made. There are so few lagers in distribution right now with this level of refinement. I can’t praise this beer enough. To put things in perspective, I have never before seen my wife enjoy a pale lager of any type. She’s more of an imperial stout junkie. But after tasting this beer, she went out and grabbed another six-pack the next day. Truly, this is one of the biggest surprises of the year for me.