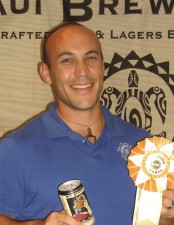 (Lahaina, Maui) – Maui Brewing Co. will be the main featured brewery in tonight’s episode of “Brew Dogs” on the Esquire Network. Hosts James and Martin join Maui Brewing’s Garrett Marrero in a quest to brew the “Ultimate Hawaiian Beer”.

The first episode of BrewDogs to be filmed in Hawaii airs Wednesday, August 6th at 9/8c on the Esquire Network. A special viewing party will be held at Maui Brewing’s Brewpub at 8pm Wednesday night to celebrate.

This is the second season of Brew Dogs in which James Watt and Martin Dickie, owners of the UK’s fastest-growing brewery, travel across America visiting different American beer towns, celebrating distinctive craft beers and creating their own locally-inspired drafts.
Maui Brewing Co. is a craft brewery based in Maui, HI. As the largest authentic Hawaiian brewery, it currently has one brewery in Lahaina, and one brewpub in Kahana that creates more than 40 different styles on a rotating basis. In 2005 Maui Brewing Co. produced 400 barrels from the single brewpub and expanded into an additional brewery location in 2007, producing a little over 20,000 barrels in 2013.

MBC has remained consistent in the vision, “Handcrafted Ales & Lagers Brewed with Aloha”. This means respect for the environment, the community, its people, and company ethics are considered in every high-quality craft beer brewed. The beers have been recognized worldwide for quality and innovation winning more than 100 medals in a short history.

Maui Brewing Co. is currently in construction to move production to a state-of-the-art brewery in Kihei. This will help meet current demand, and give the ability to open additional markets. The goal is to be brewing, drinking, and shipping beer from this new brewery in June 2014.