Beer is a journey. Wine is defined by time – on the vine and in the bottle – and place, known as terroir. But beer, thanks to the miracles of modern science, can now be made virtually anywhere in any style, transporting the beer-lover to whatever time, place, and flavors he or she desires. 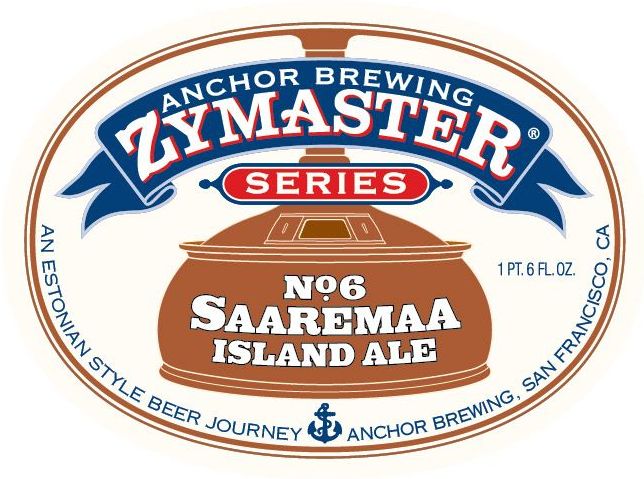 Anchor Brewing Company’s Zymaster No. 6: Saaremaa Island Ale is inspired by Anchor Brewmaster Mark Carpenter’s journey to this Estonian island in the Baltic Sea. Inhabited for over 8,000 years, Saaremaa has been occupied by Germany, Denmark, Sweden, czarist Russia, and the Soviet Union. Its culture is a rich and fascinating melting pot. Yet few outside of Estonia have ever experienced its uniquely native beers. Mark enjoyed them so much that he not only brought back his memories of Saaremaa but some brewer’s yeast, as well. Inspired by Mark’s Estonian beer journey, Anchor’s Zymaster No. 6 takes you on a journey to Saaremaa by way of San Francisco.

“My wife and I were traveling through the Saaremaa Island countryside and we stopped at a bar,” said Anchor Brewmaster Mark Carpenter. “I asked for a local draught beer and the unfiltered brew I was served was completely unique. It was the native yeast that intrigued me and ultimately become the inspiration for Zymaster No. 6. After returning to San Francisco, the Estonian yeast was isolated and cultured becoming the cornerstone of our pale ale which is complimented by the medium bitterness from Northern Brewer, a favorite hop here at Anchor. The result is a one-of-a-kind brew that transports me back to that countryside bar. We hope you’ll enjoy this beer journey, as well.”

Zymaster No. 6 (6% ABV) is a medium-bitter pale ale with Old World hop flavor and aroma. Made with pale barley malt, it has a light body and clean finish. But what makes Saaremaa Island Ale exceptional is the native yeast that Brewmaster Mark Carpenter clandestinely brought back from his Estonian beer journey. It took months for Anchor to isolate and culture this special strain, so essential to the unique character of Saaremaa Island’s indigenous beers. Anchor’s trial brews confirmed that this yeast, reminiscent of some Belgian varieties, contributes a richly complex piquancy to this deliciously distinctive ale with overtones of freshly ground clove and allspice.

Watch Mark talk about the intriguing journey he and this special yeast strain had to endure to achieve this brew: Zymaster 6 Video

Anchor Zymaster No. 6: Saaremaa Island Ale will be available in limited release beginning July 2014 in 22 oz. bottles and on draught in select restaurants, bars, and at the Anchor Brewing Taproom in San Francisco.

About Anchor Brewing Company
Anchor Brewing Company’s roots date back to the California Gold Rush making it one of America’s oldest breweries. Its Anchor Steam® Beer is San Francisco’s original since 1896. In 1965, Fritz Maytag acquired and revived the struggling brewery at a time when mass production of beer dominated and seemed unstoppable. Maytag started a revolution in beer that originated today’s craft beer movement. An undisputed icon, Anchor is America’s first craft brewery where beers are handmade in our traditional copper brewhouse from an all-malt mash. At Anchor, we practice the time-honored art of classical brewing, employing state-of-the-art methods to ensure that our beers are always pure and fresh. We know of no brewery in the world that matches our efforts to combine traditional, natural brewing with such carefully applied, modern methods of sanitation, finishing, packaging and transporting. See what we are brewing today at www.anchorbrewing.com.

About Anchor Brewing Zymaster ® Series
Zymaster® is a new word coined by Anchor Brewing to describe a brewmaster with hands-on experience throughout the a-to-z process of creating a new beer, from the research and selection of the raw materials and development of a recipe to brewing, fermentation, cellaring, and finishing. Harvest One American Pale Ale is the fifth addition to the Zymaster® Series, a unique series of beers from Anchor Brewing, rooted in its exceptional respect for the ancient art and noble traditions of brewing, featuring extraordinary ingredients, innovative techniques, and unusual flavors.