(Fort Bragg,CA) – First brewed to celebrate our 25th anniversary, the beer now known as PUCK, a petite saison of just over 4% ABV, won a place in our hearts and in our year-round portfolio of beers. Brewed with premium Pils and wheat malts and fermented with the same yeast strain used to make our renowned Saison, Le Merle, Puck is sharp and spritzy with a delicious flowery, spicy dry-hop aroma—the perfect accompaniment to any celebration, big or small. 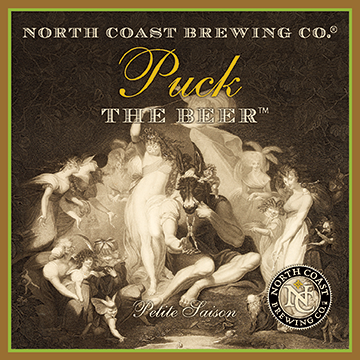 How did Puck come to be the name of this beer? Puck has been with us since long before Shakespeare; medieval English folklore tells of a woodland spirit who could help or hinder the making of your beer by providing or withholding the “barm” (in those days, the nature of the yeast that fermented beer and wine was not yet understood; it was magical!). The work of a puck, or puca, was done by moonlight and often included mischief. With a Midsummer Night’s Dream, this playful spirit became a singular character; we like to think of him embodied in “The Beer”—PUCK!