(Los Angeles,CA) – RED VELVET returns! It’s been some time, but 2010 GABF Gold Medal Winner Red Velvet – Imperial Red w/ Rye is returning Wednesday, August 13th, 2014.  We were happy to have Donny Hummel, the home brewer we collaborated with originally on Red Velvet return again to help us bring this amazing beer back to life. Coming in at 10.8% ABV, this full bodied, hop monster of a beer will be available on draft as in previous years and now for the first time, in 22oz Bottles (distributed as always via our friends at Stone Distribution). Red Velvet is a labor of love for the brewery and we’re excited to be able to provide folks with the beer they’ve been asking for so long. Hope you’ll come out and join us! 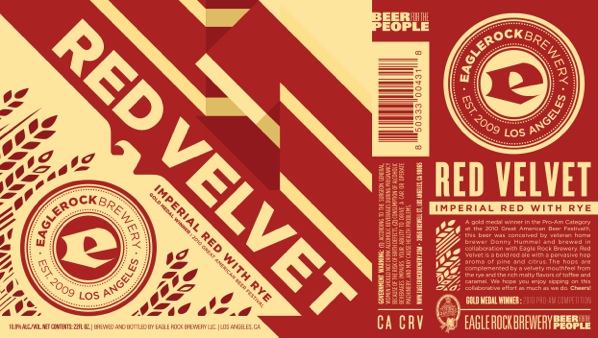 For those less familiar, here’s a little more on the beer:

A gold medal winner in the Pro-Am Category at the 2010 Great American Beer Festival® , this beer was conceived by veteran home brewer Donny Hummel and brewed in collaboration with Eagle Rock Brewery. Red Velvet is a bold red ale with a pervasive hop aroma of pine and citrus. The hops are complemented by a velvety mouthfeel from the rye and the rich malty flavors of toffee and caramel. We hope you enjoy sipping on this collaborative effort as much as we do.  Cheers!