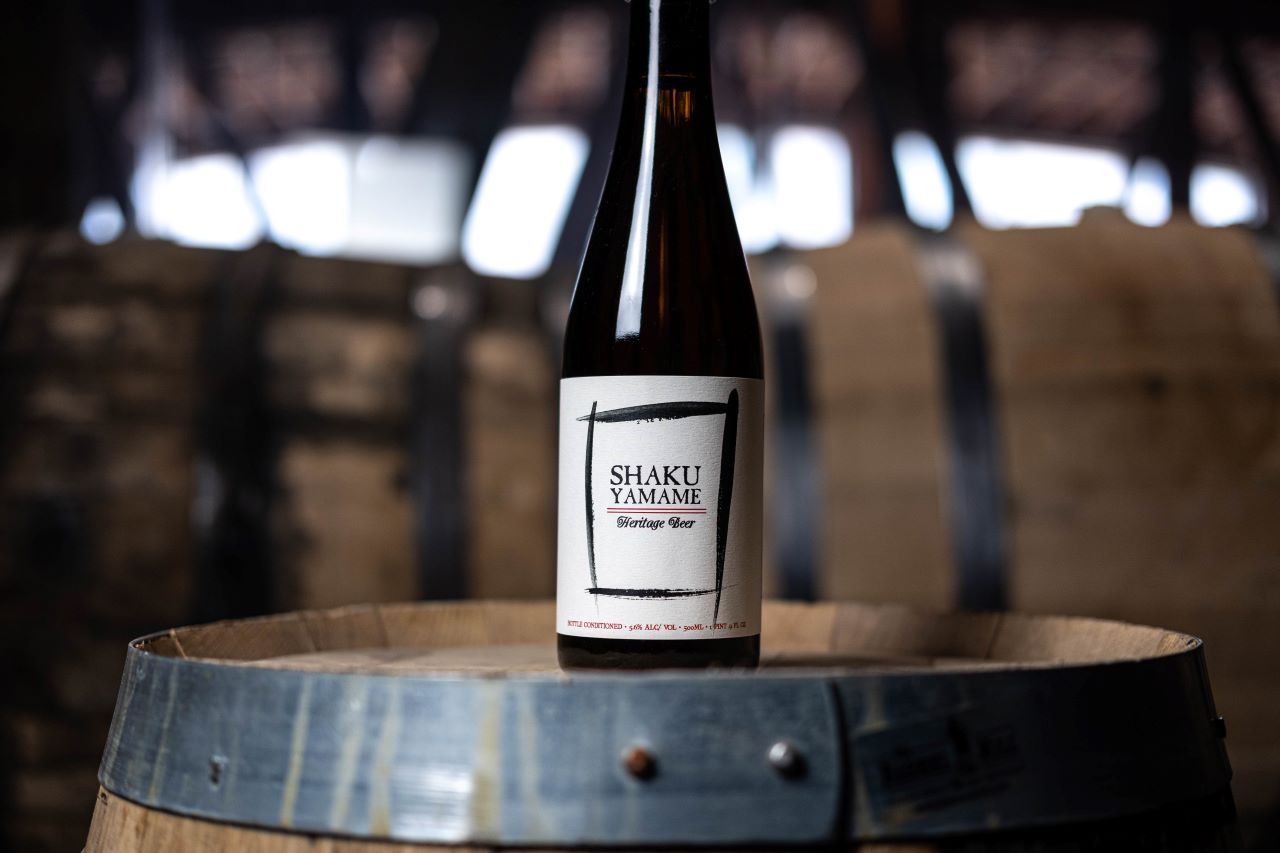 Shaku Yamame is a blended beer consisting of a foeder-fermented, mixed culture beer and a puncheon-aged, mixed culture farmhouse ale. Kumquats and green tea were then added to the blend. The 5.6% ABV and 18 IBU beer contains a nice citrus flavor with earthy, tannic characteristics.

The foeder-fermented base beer came from the same foeder that produced Ambient Roar, the most recent Heritage Beer released by Von Ebert, and contained a foundation of pilsner malt, kamut, spelt, and einkorn.

After blending the foeder-fermented beer with a one year old puncheon-aged, mixed culture farmhouse ale, Fukushu kumquats were added. These kumquats are grown in Japan and known for their sweetness and tart finish. Von Ebert sourced the kumquats from Pearson Ranch, a specialty citrus grower in California. Green tea was then steeped in the beer until the flavor was perfect.

“We thought adding green tea to the beer would give it a really nice tannic quality,” explained Sean Burke, head brewer, Von Ebert Glendoveer. “It also ended up producing a really cool drying effect that hits you as you’re drinking the beer. We worked with our friends at The Jasmine Pearl Team Company to guide us through the tea selection. We tasted a number of varieties, and though the beer was mostly conceptualized as being influenced by elements of Japanese culture, we settled on using 75% of a Chinese variety called Chunmee. It has a floral, nutty mouthfeel with characters of white flowers and woodiness. The remaining 25% of the tea was Tsuyuhikari Shincha, a Japanese variety that comes through as oceanic, similar to blanched greens and rice. It’s more tannic than the Chunmee.”

The blended beer with kumquats and green tea added was then both bottle and keg conditioned to mature.

Burke, an avid fisherman, explained the beer’s name, “Shaku is an old Japanese measure of length roughly equaling one foot. The Yamame is the name of the cherry trout that live in certain streams in Japan. Because of certain conditions, these fish only live two to three years and rarely get bigger than one foot. It’s considered a trophy fish in Japanese fly-fishing.”

Shaku Yamame will be available on Friday on draft and in bottles at both Von Ebert locations – Glendoveer and the Pearl.

Von Ebert Brewing sits at the crossroads where storied traditions meet bold new ideas in brewing. Independently owned and operated, Portland, OR, based Von Ebert produces award-winning beers in a variety of styles. In addition to modern IPAs and crisp lagers, the oak-aged, bottle-conditioned heritage beer program sets the brewery apart. All of the beers pair perfectly with the elevated American pub cuisine served at both brewpub locations. For more information, please visit www.vonebertbrewing.com.