(Milton, DE) – The Holy Grail for Hopheads, Dogfish Head Craft Brewery’s iconic 120 Minute IPA is back with a bold, new bottle carrier. Originally released in 2003, 120 Minute IPA is an Imperial IPA continuously hopped with a copious amount of high-alpha American hops throughout the boil and whirlpool, and dry-hopped with another whopping pallet of hops. Clocking in at 15-18% ABV, this unfiltered and abundantly hoppy brew boasts sweet, almost candy-like, hop aromas with flavors of hop resin and a lingering bitterness. Making its way shelves nationwide – where legal, this year’s 120 Minute IPA is available NOW in 4pk/12oz bottles. 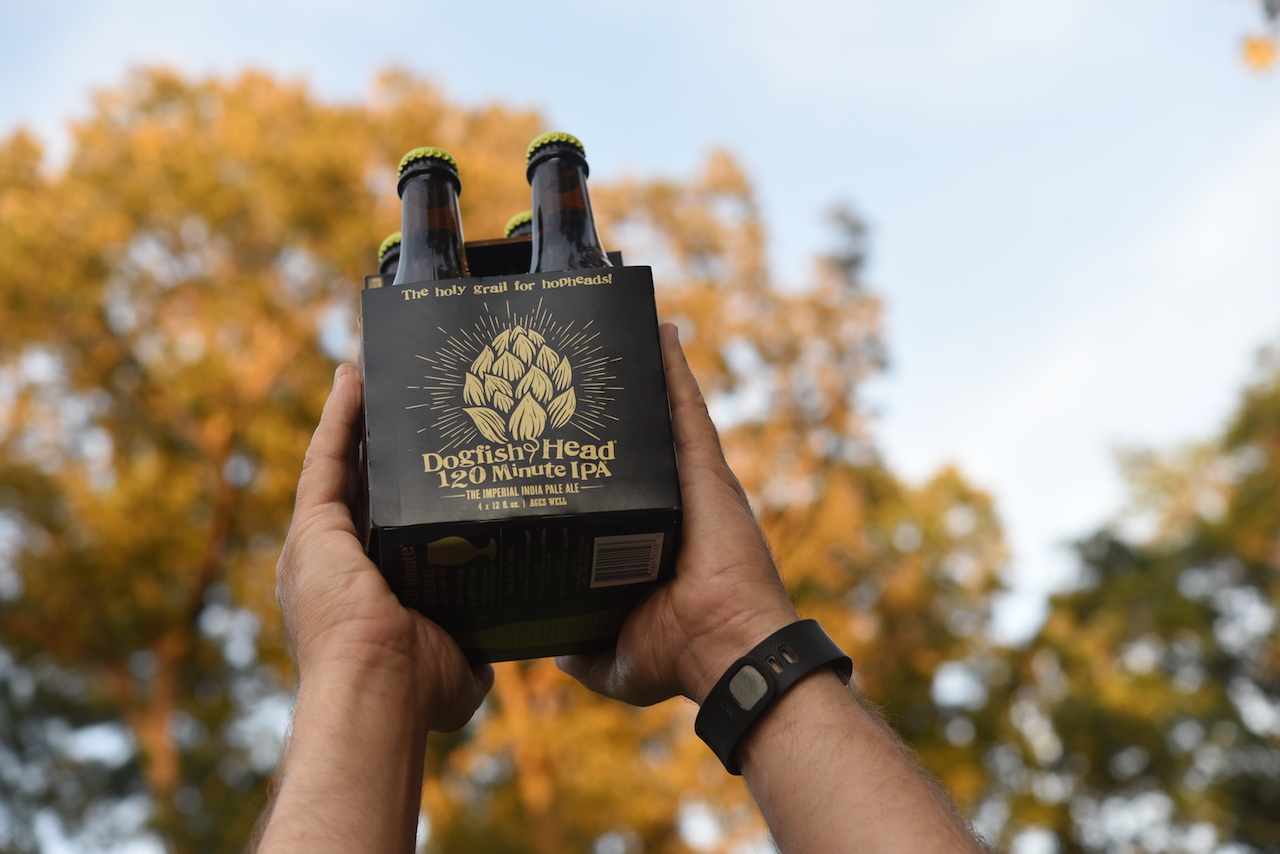 “The release of 120 Minute IPA is always one of my favorites times of year. I’m beyond excited to grab a couple of bottles of this year’s batch to add to my cellar, as well as a bottle to crack open and share with my wife, Mariah,” said Sam Calagione, Dogfish Head founder and brewer. “To best experience 120 Minute IPA’s intricate flavor profile, I recommend serving it cool, not cold in a snifter or cognac glass. And if you can muster up the self-control to allow your 120 Minute IPA to age for a couple of years, the flavors and aromas will grow even more complex, with greater notes of marmalade and an enhanced sherry-like character.”

To better complement the audacious aromas and flavors found in 120 Minute IPA, Dogfish Head revamped the beer’s bottle carrier, making it bolder and more eye-catching with a jet-black background and metallic gold graphics. At the center of the design is something every beer-lover will quickly recognize, a hop cone. The ingredient responsible for bringing 120 Minute IPA to life, this hand-drawn hop cone exudes golden rays of light, assuring folks that their search is over – they found it, the Holy Grail for Hopheads.

Those scouring the shelves for some 120 Minute IPA will notice it is not the only one of Dogfish Head’s off-centered ales sporting a new look. Dogfish Head’s 60 Minute IPA, a classic east coast IPA brewed with a slew of Northwest hops, is also boasting a brand-new design. The forest green graphics gracing the label of Dogfish Head’s classic 60 Minute IPA feature a clock-like contraption to represent Sam’s invention of the continual hopping process, the brewing mechanism that gives 60 Minute IPA is abundantly hoppy, yet beautifully balanced flavor profile.

“At Dogfish Head, we brew ‘Off-Centered Ales for Off-Centered People.’ Our unique recipes and the liquids they produce are what set us apart from the other 7,000+ independent craft breweries in America,” said Sam. “With our new packaging designs for 120 Minute IPA and 60 Minute IPA, we’re hoping to highlight the off-centeredness within each bottle or can and to celebrate the hand-crafted touch that goes into the creation of each our delicious libations.”

Dogfish Head has proudly focused on brewing beers with culinary ingredients outside the Reinheitsgebot since the day it opened as the smallest American craft brewery nearly 25 years ago. Dogfish Head has grown into a top-20 craft brewery and won numerous awards throughout the years, including Wine Enthusiast’s 2015 Brewery of the Year and the James Beard Foundation Award for 2017 Outstanding Wine, Spirits, or Beer Professional. A Delaware-based brand with Dogfish Head Brewings & Eats, an off-centered brewpub and distillery, Chesapeake & Maine, a geographically-enamored seafood restaurant, Dogfish Inn, a beer-themed inn on the harbor, and Dogfish Head Craft Brewery, a production brewery and distillery featuring the Tasting Room & Kitchen and Dogfish Head Distilling Co., Dogfish Head is a supporter of the Independent Craft Brewing Seal, the definitive icon for American craft breweries to identify themselves to be independently-owned and carry the torch of transparency, brewing innovation and the freedom of choice originally forged by brewing community pioneers. Dogfish Head currently sells beer in all 50 states and Washington D.C. For more information, visit www.dogfish.com, Facebook: @dogfishheadbeer, Twitter: @dogfishbeer, and Instagram: @dogfishhead.