(BLOOMINGTON, INDIANA) — Upland Brewing Company announces their spring sours release and new process for reserving bottles. Their second quarter release includes the highly sought after Pawpaw, a collaboration beer with Freigeist Brewery, Cavendish, and Boysenberry. The public can begin reserving bottles April 16 – April 22 and pick them up April 25 – May 9. 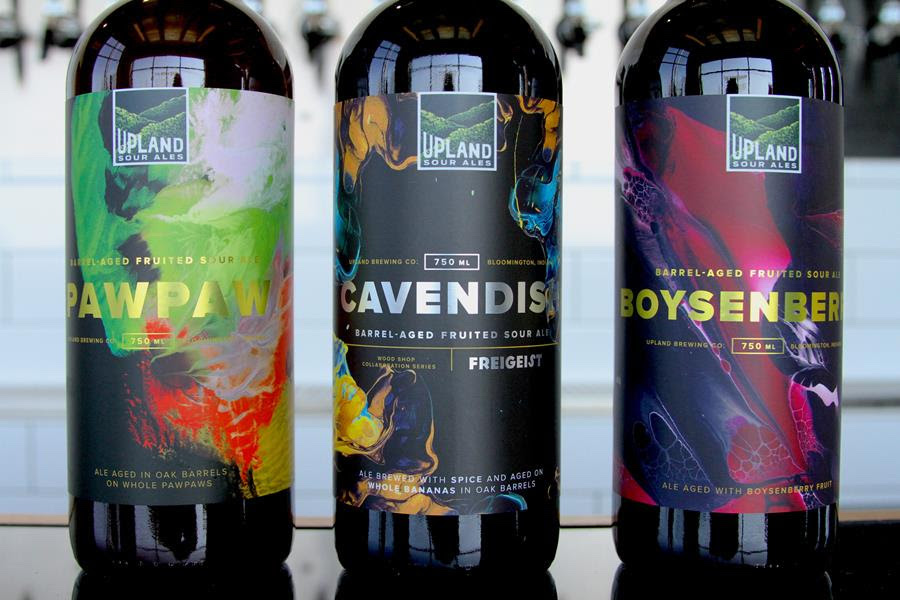 “This is an exciting lineup. We’re providing more avenues to reserve bottles of these limited releases to make them more available to everyone, and to guarantee reservations in advance. Reserve online or in person at one of our pubs or tasting rooms – we’ve got you covered,” said Adam Howe, Director of Retail Development

Pawpaw is one of Upland’s most popular and highly reviewed sours, receiving a 95 rating from Beer Connoisseur. The pawpaw fruit, sometimes referred to as the “Indiana Banana” grows indigenously around the Midwest, and Upland sources from a grower and breeder around the Terre Haute, IN area. Upland takes their 6-8 month blonde sour base and ages on pawpaw fruit for an additional 3 months. Aromas of banana and mango are accompanied by tart and floral notes. Flavor is slightly sweet with tangy banana and tropical fruits that envelope the palate.

Upland’s Sour Program is working on several collaboration brews for 2018 and this release includes Cavendish, a collab with Freigeist. When the German brewery visited last year and talks of working on a beer together began, they wanted to blend the fruits of Upland with the smoked malts Freigeist uses, so they landed on a fruited, smoked beer. Cavendish is a blend of Upland’s Darken and Hefeweizen—both aged in wine barrels. Then it’s re-fermented on 400 pounds of bananas that were smoked on plum wood at Sugar Creek Malt Co. out of Lebanon, IN. The beer is approachably tart, with flavors of spice and fruit melding with light hints of banana and smoke.

In 2017, Upland released a small-batch experimental brew on draught only that was well received across markets, so this year they scaled up the recipe and added it to the spring release. Boysenberry’s malt bill includes 30% Unmalted Wheat, which undergoes starch conversion by boiling during a “turbid mash.” Aged German Spalt hops are used during the kettle boil and the beer is aged for 6-8 months in oak barrels, developing a tart, refreshing sour. Select barrels are transferred and aged for an additional month on boysenberries.

Upland’s Secret Barrel Society members will begin reserving bottles in early April and the public will have access to reserve a limited quantity online beginning April 16 – April 22. Previously, Upland has used a lottery system, but this release is first come, first served for bottle reservations. Each sour comes in 750 ml bottles. More information available at uplandsours.com.