(Stratford, CT) – After a tremendous consumer response in 2017, Two Roads Brewing Company of Stratford, CT is thrilled to announce that two beers from their popular Tanker Truck Sour Series will be available year-round starting February 10th. The brewery chose two of its most popular fruit-flavored goses, Passion Fruit and Persian Lime, to anchor their year-round offerings. Both beers will be available in draft and 4-pack 16 oz. cans wherever Two Roads is sold. 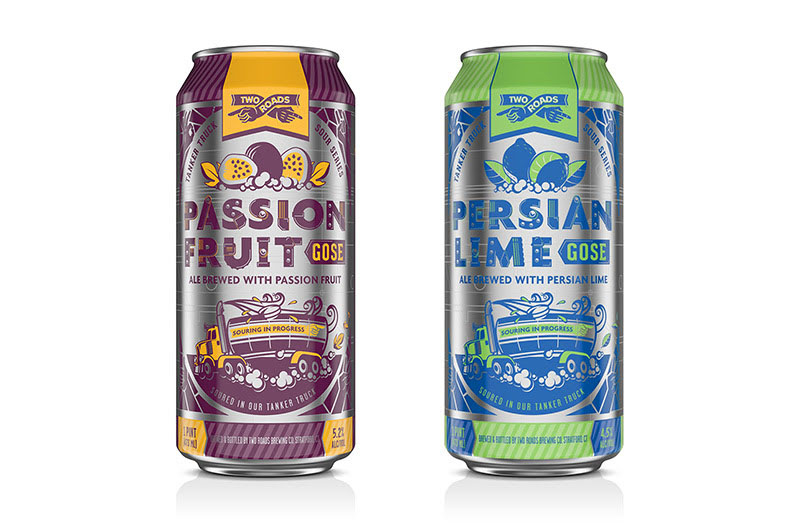 The Tanker Truck Sours Series is a lineup of fruit-forward, refreshingly tart beers that are soured in an old dairy truck, which sits adjacent to the brewery. The use of a tanker truck plays into the Two Roads philosophy of taking The Road Less Traveled and also showcases their love of innovation in the brewing world. The Tanker Truck is decorated and visitors to the Two Roads Tasting Room can view the real-life counterpart of the truck that’s represented on the packaged product. The demand for the beer has increased so much, Two Roads added a second tanker truck in early 2018.

“Due to fears about lactic bacteria contaminating the main brewery we had to come up with a novel solution to sour the beer without threatening our main operation,” said Two Roads Master Brewer Phil Markowski. “The cost of a dedicated tank installed outdoors is very expensive. It occurred to me that a used milk tanker would be sanitary, well-insulated and relatively inexpensive. Now, a little less than two years later we’ve just added a second tanker to satisfy demand for our Tanker Truck series!”

“We introduced our Tanker Truck Sour Series last year as a rotating seasonal,” added Chief Commercial Officer Clem Pellani. “We found that many consumers liked the variety of fruit flavors that we introduced but an equal number had favorites that they wanted to be able to buy year-round. As a result, we decided to release Passion Fruit Gose and Persian Lime Gose on a permanent basis and for continued variety, we are going to rotate in other interesting fruit flavors throughout the year.”

Pellani added further, “What’s exciting about this line of sour beers with real fruit added is that they not only appeal to traditional sour beer fans but also to wine drinkers and other non-craft drinkers who like the nuanced fruit flavors along with the pleasant tartness. We found this to be the case in our brewery tasting room as well as in the market.”

In addition to having two year-round goses, a rotating flavor will be introduced every few months in draft and 16 oz. cans. In December of 2017, Two Roads released Clementine Gose, which sold very quickly. The next limited flavor coming out in late March will be a gose made with Sauvignon Blanc grapes. Gose fans and wine drinkers alike will appreciate the distinctive tropical fruit notes, including aromas and flavors reminiscent of passion fruit, gooseberries, lime, honeydew melon and a pleasing mineral dryness.

ABOUT TWO ROADS BREWING
Two Roads opened its doors in December 2012 having earlier acquired and renovated a 100-year-old vacant, brick factory building in Stratford, CT. Its name and philosophy are inspired by the Robert Frost Poem “The Road Not Taken”—a philosophy brought to life in the beers they create using the highest quality brewing and packaging equipment. The Two Roads Brewery Tasting Room is open every day; for more information go to www.tworoadsbrewing.com.