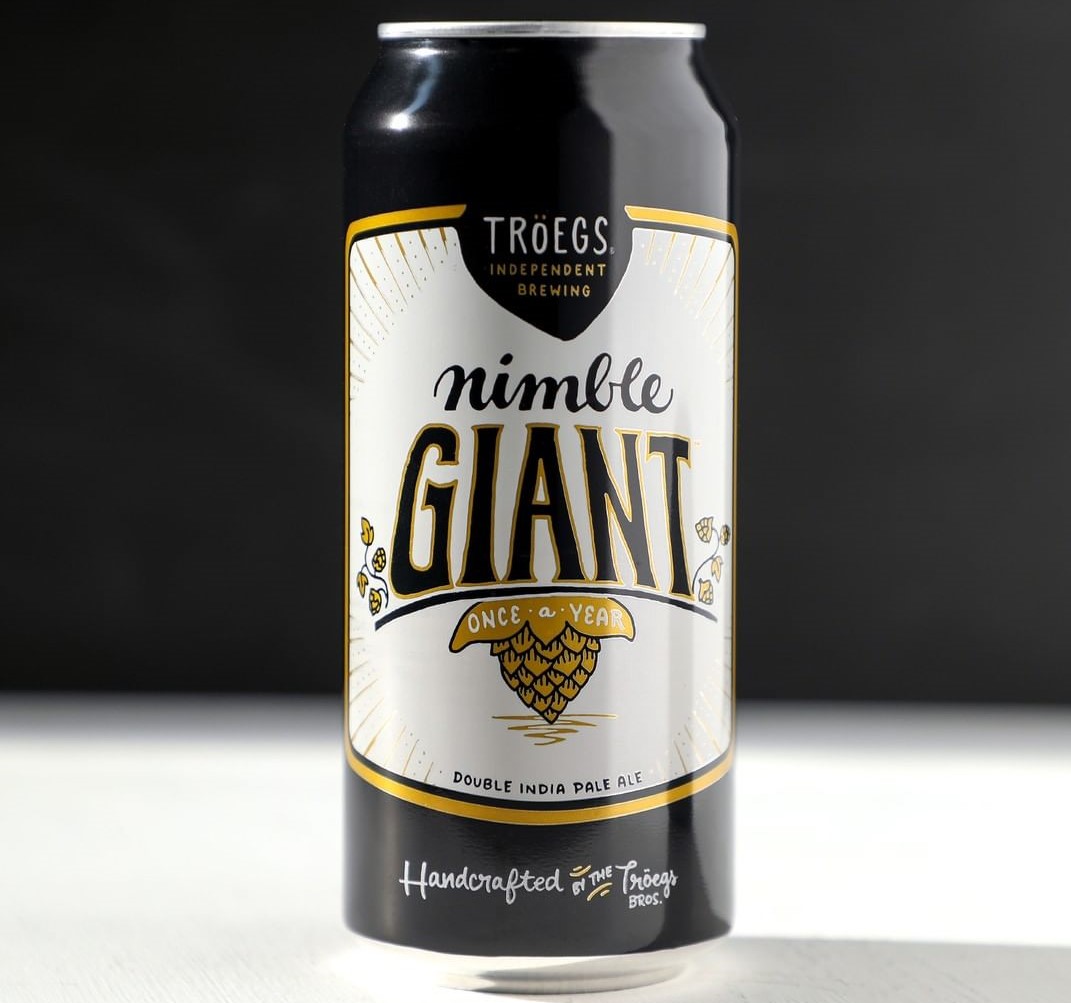 One of the Hershey, PA, brewery’s most-loved beers, this annual release rivals its iconic holiday ale, Mad Elf, for the excitement it generates every year.

Nimble Giant came up through the small-batch Scratch Series, starting with an experiment with Mosaic hops. After about a half-dozen Scratch beer variations, the Tröegs brewing team hit upon a hop combination everyone loved – Mosaic, Simcoe and Azacca – and never looked back.

In the end, the beautifully bold Nimble Giant is ripe with notes of grapefruit, pineapple and honeysuckle. Clocking in at 9% ABV, this deep orange Double IPA is well-balanced by a backbone of pilsner and Vienna malt and drinks effortlessly.

This fan favorite is rated 4.1 on Untappd and is a consistent top 10 global trending beer on the geosocial rating platform.

Nimble Giant is available on draft and in 4-packs and cases of 16-oz. cans wherever Tröegs beer is sold.

Founded in Pennsylvania in 1996 by brothers John and Chris Trogner, Tröegs Independent Brewing is driven by a sense of adventure and curiosity. From the beginning, our brewery has been built by family, friends and kindred spirits who share a love of great beer.

“We’re not an English ale brewery,” says co-founder Chris Trogner. “And we’re not a German lager brewery. We take bits and pieces from each one of those traditions and try to come up with what we think is a very creative and great-tasting beer.”

Tröegs is widely known for award-winning beers like Perpetual IPA, Troegenator, Nugget Nectar and Mad Elf, as well as our experimental Scratch Series, wood-aged Splinter Series and Hop Cycle Seasonals. Tröegs started working in earnest with local ingredients back in 2002 with the debut of holiday favorite Mad Elf. Today, the brewery buys about 25,000 pounds of local honey and 100,000 pounds of Pennsylvania-grown barley every year. Tröegs also sources local produce including pumpkins, cherries, peaches, nectarines and strawberries from the fertile Fruit Belt of Pennsylvania.

Through rotating seasonal menus, Tröegs Scratch Kitchen is a showcase for new tastes and flavors, and our Guided Production Tour was named the best brewery tour in America by readers of USA Today. The annual Art of Tröegs contest showcases our love of art by challenging fans to create original artwork inspired by our beers.

“We’re drawn to people with a sense of adventure,” says co-founder John Trogner. “And we think they’re drawn to Tröegs.”