(Athens,GA) – Terrapin’s Monster Tour began back in 2005 as a celebratory reaction to a change in Georgia beer laws that allowed for beer over 6% ABV. This first MBT beer of 2016, Hop Selection, is a bit newer to the lineup. First released in 2015 with Ella hops, the 2016 version will be highlighting Vic’s Secret hops. 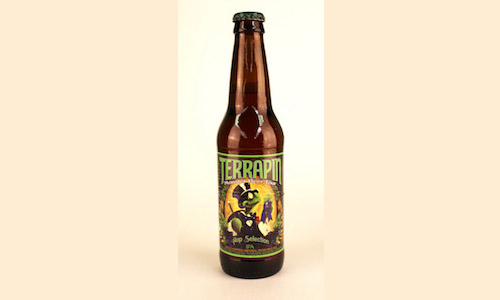 Vic’s Secret comes to us from Australia. Originally released as Victoria’s Secret, after its state of origin, the hop’s name was changed because an undergarment manufacturer got their panties in a twist. This hop is fairly new, available for commercial production for the first time in 2013.

Similar to other Australian hops, such as Galaxy, Vic’s Secret is best used in dry hopping. But its 14 – 17% Alpha Acid level makes it a good bittering hop as well. Late additions to the boil often present earthy flavors, while dry hopping expresses pineapple and passion fruit aromas.

“Hop Selection” Single Hopped Imperial IPA is a celebration of our favorite hop from the current harvest. Whether it’s an old classic, a new variety, or an experimental stand out, this beer will continue to change yearly showcasing our favorite hop of the season.

Hop Selection will be available throughout our distribution network in Kegs and Bottles (4pk).

Terrapin Beer Co. sprang to life when two brewers crossed paths while working at a microbrewery in Atlanta. Brian “Spike” Buckowski and John Cochran had big ideas and knew they could contribute to the small but fast-growing Southeastern craft beer scene. Together, they set their sights on creating beers unlike any that were currently available in the Southeast.

Terrapin Beer Co. entered the craft beer world with a bang in April 2002 with their first beer, Rye Pale Ale. Thirteen years and impressive growth later, Terrapin has established itself as the premier IPA brewer in the Southeast and a major player in the American craft beer industry. A far cry from their humble one-beer beginnings, Terrapin now offers a portfolio of six year-round beers, four Seasonal Sessions beers, the Monster Beer Tour collection of four high-gravity selections, and a series of one-time special releases. Terrapin co-owners John Cochran, President, and Brian “Spike” Buckowski, Brewmaster, have developed a reputation for high-quality beers that push the boundaries of creative brewing.

Terrapin Beer Co. is open to the public for tours every Wednesday – Sunday with live music and tastings;please see our website for hours of operation. The brewery is located at 265 Newton Bridge Road in Athens, GA. The tours are an excellent opportunity to taste Terrapin’s full line of award winning beers at their freshest and to see the brewing process first hand. For more information visit the website or Facebook page.