(Irvine, CA) – TAPS Fish House & Brewery is bringing its popular concept of seafood, steak and craft beers to South Orange County with the opening of a location in Irvine on June 8. 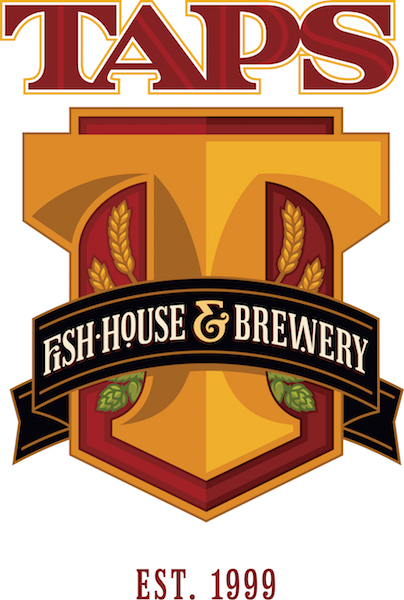 Boasting the largest seating capacity of its kind in the area for private events, and delivering its signatureSunday brunch, lunch, dinner and happy hour in settings ranging from fine dining to a more casual bar-lounge and patio, the new TAPS is located at 13390 Jamboree Road at The Market Place in Irvine. The restaurant has hired 125 employees.

“We are delighted to be opening in Irvine,” proprietor and founder Joe Manzella said. “Our search for the right location in South O.C. has taken more than 10 years and encompassed five different development projects. The Market Place is perfect for us. It’s simply a win-win scenario across the board.”

Like all TAPS restaurants, the new 10,000 square foot Irvine location is all about visibility.

Guests arriving through a brick entryway are welcomed at a made-to-order walnut reception desk in a foyer that showcases a custom built glass red wine storage cellar.   A humidor will display fine cigars available for purchase. A sweeping view of the inviting bar, oyster-charcuterie station, exhibition kitchen, main dining area with TAPS’ signature 18-foot-high ceilings and massive doors to the private dining room create a striking first impression. Yet Manzella’s third TAPS has a unique, cozier vibe than either the flagship Brea TAPS or the second location that opened in Corona in 2007.

Libations can be enjoyed in the restaurant’s bar and lounge, which seats 105, and has an understatedindustrial feel with stools trimmed in nail heads and a bar top of Cosmos “leather” granite with quartz and minerals in grey and brown with black accents. The back bar has two 70-inch LED televisions, with an additional six throughout the lounge.

A 1,800-square-foot, cigar-friendly patio—with full-service menu and cocktails— seats 100. It is warmed by a large fire pit with counter stools for 10. A dramatic California Live Oak in the patio is also surrounded by seating.

The private dining room at the new TAPS accommodates 125 guests and features a handsome stone fireplace and large barn doors that slide open across an arched entry.  A state-of-the art AV system and two large HD flat screens make for business friendly events. A divider will be installed that can be drawn to create two private dining spaces, one accommodating a smaller group of 35.

TAPS is as well known for its quality cuisine served in generous portions as it is for award-winning, handcrafted ales and lagers and critically acclaimed wine list, which includes 150 California-centric selections by the bottle and 20 wines by the glass.

The Irvine location has an impressive 24 taps—14 of them for TAPS seasonal and signature ales and lagers, the most offered at any TAPS location. An additional four guest beers on draft will be selected by Brewmaster David Huls. There will be six draft cocktails as well. Six premium wines, produced by some of the state’s top vintners, are featured on separate wine taps. A new craft cocktail program will debut here that includes a showy liquid nitrogen take on the classic Moscow Mule.

Guests interested in procuring a wine locker pay an annual fee of $1,000 and receive a monthly $85 certificate good towards the purchase of wine. The certificate is valid for 30 days.

TAPS in Irvine is certain to become the new go-to choice for South County residents for the six days a week happy hour, with special pricing on beers, wine and cocktails along with an impressive menu selection.

TAPS’ famous seafood, hand-cut steaks and signature oyster-charcuterie bar, with a marble iced display and seating for eight, are highlights of an extensive menu that has been honed and refined since the restaurant first opened more than 15 years ago.

This location will be the first TAPS to showcase some meats and fish cooked in a J & R “Little Red Smokehouse” smoker. The Rolls Royce of smokers from Mesquite, Texas is fueled by apple wood and cherry wood and is inspired by the popular smoker at sister restaurant Lillie’s Q in Brea. A smoked prime rib is offered nightly. Rotating smoked fish offerings include trout, albacore, salmon, mussels and oysters and will be featured at TAPS’ famous over-the-top Sunday buffet brunch.

Pizza lovers can enjoy TAPS’ reimagined pizzas, which have artisanal toppings and are crafted from special dough and baked in a Wood Stone Fire Deck pizza oven.

LOCATION AND OTHER INFO

TAPS is found on social media at https://www.facebook.com/TAPSRestaurantIrvine and http://instagram.com/tapsfishhouse

TAPS Fish House & Brewery is a celebration of seafood, hand-cut steaks and award-winning traditional and innovative ales and lagers. A connoisseur’s wine list recognized by the Wine Spectator showcases a variety of wines. The restaurant, privately owned by founder Joe Manzella, offers a choice of fine dining or the more casual, comfortable bar-lounge; oyster bar, multiple patios and private dining. TAPS is known for its popular Sunday Brunch. The original and flagship TAPS debuted in Brea Downtown in Orange County, California in 1999; a second location serving the Inland Empire opened at The Shops at Dos Lagos in Corona in 2007. The Catch in Anaheim is a sister restaurant of the organization. Lillie’s Q, a partnership with renowned barbecue Chef Charlie McKenna, opened in Brea Downtown in December 2014.