(ATLANTA,GA) – The boys and girls at SweetWater Brewing couldn’t wait until Opening Day to hit a home run in Braves Country. Georgia’s largest craft brewery and the Atlanta Braves have teamed up to introduce a limited run of cobranded beer packaging featuring iconic Turner Field and the Braves logo and colors. 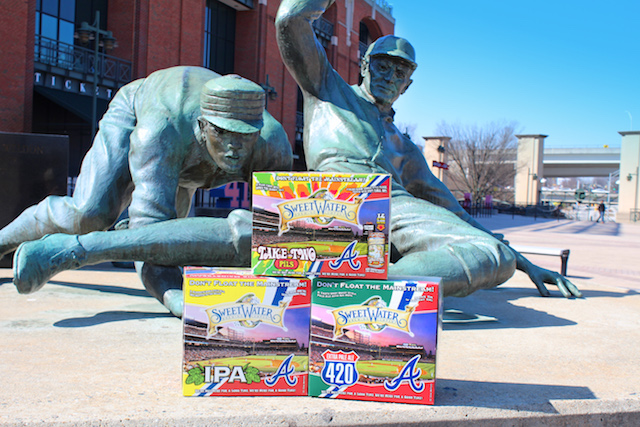 Beginning in early March, Braves and beer enthusiasts can all catch the brewery’s two most popular styles, 420 Extra Pale Ale and IPA, sporting the new design in 12-pack bottle packages. To sweeten the deal, SweetWater is debuting its new Take Two Pils cans in a co-branded 12-pack as well.

“Our partnership with the Braves has been fantastic so far, and featuring both the team and the stadium on our packaging makes it even better,” said SweetWater Founder and Big Kahuna Freddy Bensch. “We can’t wait for the 2015 season to kick off so that even more fans can enjoy the SweetWater goodness at Turner Field this year. It’s fun to give fans the opportunity to bring that experience into their homes with these beautiful 420, IPA and Take Two Pils packages!”

The 2014 addition of SweetWater’s can line was welcomed with open arms by craft beer fans around the Southeast, who snatched up 420 Extra Pale Ale and IPA in 12-ounce and 16-ounce cans to sip at the lake, the beach, the game and the porch. The brewery expands its lineup with Take Two Pils this spring with more brews to come throughout the year. While these three lip-smackin’ styles are available year-round in bottles and cans, the co-branded Atlanta Braves packaging is limited. Look for the 12-pack bottles of 420 Extra Pale Ale and IPA as well as Take Two Pils 12-pack cans all over Braves Country leading up to Opening Day and well into the 2015 season!

ABOUT SWEETWATER BREWING COMPANY
Living by the motto “Don’t float the mainstream,” SweetWater Brewery has been blazing its own path in craft beer throughout the Southeast since its inception in 1997. With a brewer calling the shots, quality of beer—and life—are always most important in crafting a lineup of lip-smackin’ brews. Widely known for its flagship 420 Extra Pale Ale and recent Great American Beer Fest gold medal winner Take Two Pils, SweetWater also serves up an ever-evolving Catch & Release seasonal lineup of brews and an off-beat, one-off Dank Tank series. SweetWater invites folks to join them for tours and tastings of their Atlanta brewery every Wednesday through Sunday. Visit www.sweetwaterbrew.com for more info about SweetWater, or hang out with your social thang out by following SweetWater on Twitter/Instagram @sweetwaterbrew, or on Facebook at facebook.com/sweetwaterbrew. And always remember; drink ‘em if you got ‘em!