(Chicago, IL) – Following the release of Couch Funding Cherry Stout, Spiteful Brewing is taking part in the trend of businesses tapping their fan bases for financial support. Spiteful’s fundraising effort, however, differs from most: The brewery is asking their fans to explore the recesses of their furniture. “Think about the coins that just fall out of your pocket into the sofa. There might be several dollars in there,” said Spiteful spokesman Calvin Fredrickson. “No amount is too small. We just need you to dig deep and contribute what you can.” 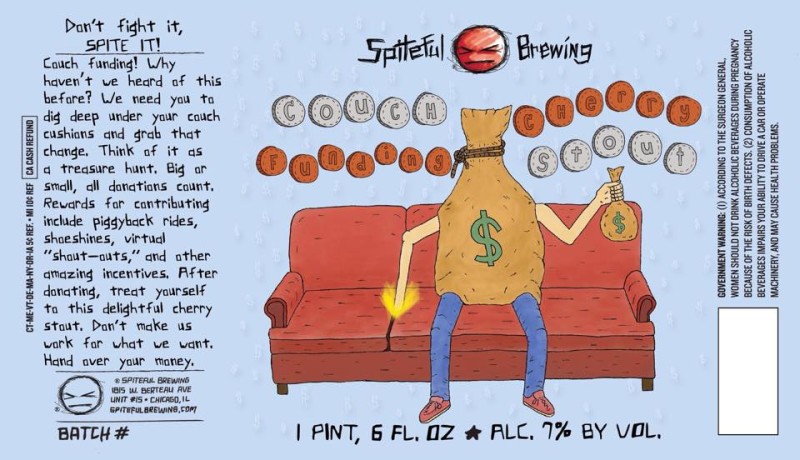 The purpose of Spiteful’s so-called couch funding campaign remains unclear. One contributor with the username Marcus the Reindeer donated $0.63, commenting on the brewery’s Facebook page, “I know my money is in good hands. These guys never disappoint.” Couch Funding’s label art depicts a personified bag of money reaching into a couch for additional funds. “Don’t make us work for what we want,” reads the label copy. “Hand over your money.”

When pitched with the idea of “couch funding,” potential investors were bemused. Some speculated that the brewery intended to crowdfund instead, and that a campaign of couch funding would not prove to be lucrative. “I think they mistook couch funding for crowdfunding,” said one local startup guru. “More power to them. I have to respect the hustle. Even if it’s for nickels and dimes, literally.”

Conditioned on tart Michigan cherries, Couch Funding begins with a hearty roast profile and finishes sweet and slightly tart, the brewery stated. Spiteful’s Player-Coach, Jason Klein, describes it as “dessert in a bottle, reminiscent of a chocolate-covered cherry.” Packaged in 22-ounce bottles, Couch Funding Cherry Stout (7.0% ABV) is being distributed across the Chicagoland area this week.