SweetWater Brewing Steps Up In Both Science & Style

Atlanta, GA – SweetWater Brewing Company is revamping their bottles inside and out. The Georgia-based brewery announced today that will debut a fresh look for its glass packaging, complemented by a brand-spankin’ new bottle conditioning process for the liquid inside. Folks can expect to wrap their hands around the new curvy bottles and wet their whistles with freshly conditioned bottled beer beginning the second week in August.

SweetWater began conditioning beers with the launch of cans in March of this year. Beginning with 420 Extra Pale Ale and India Pale Ale (IPA) in aluminum this spring, the brewery teased bottle conditioning on the horizon. Now, the process will expand to include bottle brews launching with 420, then moving on to IPA and additional brands in the coming months.

“With our new expansion up-to-speed, we are finally at a place where we can now shift our focus from sustaining to evolving,” said Freddy Bensch, founder and Big Kahuna at SweetWater Brewery. “Quality of product – and of life – have always been what we value most, so we we’re thrilled to be at a place where we could make an investment in the advancement of our packaging and beer, ultimately delivering the freshest possible experience for our customers.” 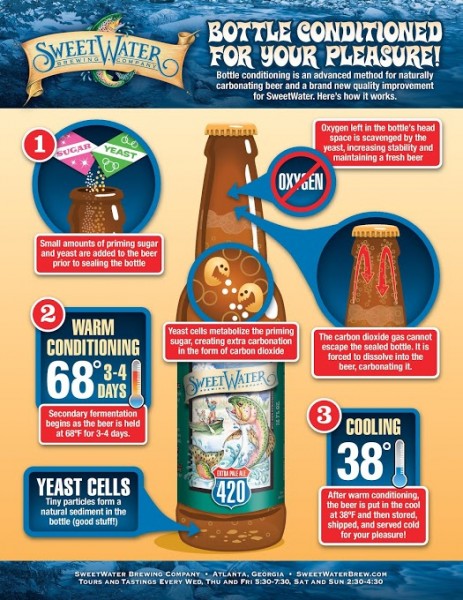 Conditioning is a natural method used to carbonate beer. Instead of mechanically forcing carbon dioxide into the brew, a carefully calculated amount of priming sugar and yeast is added to the beer immediately prior to packaging. With a small amount of yeast active in the beer, it consumes the residual sugars as well as any oxygen in the head space during a brief secondary fermentation stage, naturally ensuring fresher and more stable beer for longer periods. Once the beer is packaged and sealed, the gas cannot escape and is forced to dissolve into the beer, thus naturally carbonating it.

The brand-new bottle, made by Owens-Illinois, Inc. (O-I), features an original design complemented by fresh bottle neck labels. The SweetWater logo is embossed twice on the shoulder of the bottle. Additionally, the brewery’s motto – “Don’t Float the Mainstream”– is molded in the lower label panel, creating a visual boundary supporting the paper label. The package takes cues from a traditional Belgian bottle profile, but adds to it by incorporating a water wave pattern to the new bulbous neck, giving the bottle a signature look while also connecting the brand to the water that is so vital to the brewery.

“SweetWater challenged us with creating a proprietary bottle design that would help them stand out on the shelf while working with their existing fill and handling capabilities,” said Raul Paredes, director of new product development at O-I. “The design solution provides differentiation in a sea of sameness where standard long necks are the norm.”

About SweetWater Brewing Company
Living by the motto “Don’t Float the Mainstream,” SweetWater Brewery has been blazing its own path in craft beer throughout the Southeast since its inception in 1997. With a brewer calling the shots, quality of beer—and life—are always most important in crafting a lineup of lip-smackin’ brews. Widely known for its flagship 420 Extra Pale Ale and recent Great American Beer Fest gold medal winner LowRYEder IPA, SweetWater also serves up an ever-evolving Catch & Release seasonal lineup of brews and an off-beat, one-off Dank Tank series. SweetWater invites folks to join them for tours and tastings of their Atlanta brewery every Wednesday through Sunday.