(ESCONDIDO, CA) – The latest release from the Stochasticity Project incorporates newly developed forms of grain yet to be widely used in the brewing world. Malted buckwheat and malted millet were included in the grain bill to create this deep-red, hoppy ale with a unique malt character. Making its debut beginning this week, Stochasticity Project Grainiac will start arriving in 22-ounce bottles and on draft at select retailers nationwide. 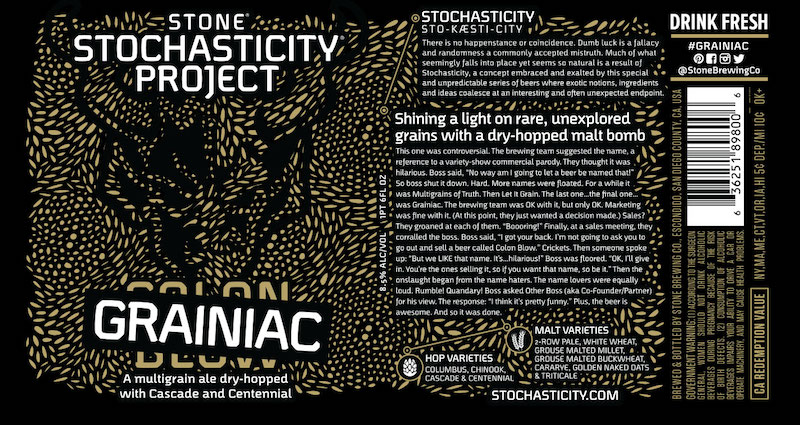 Upping the hop factor is common practice for West Coast-based craft breweries, but this beer transpired from a different search, one that eventually led to a small malting facility in Wellington, Colorado. Here, Stone Brewmaster Mitch Steele came in contact with Grouse Malting and Roasting Company.

“Earlier this year, we learned about Grouse Malting and their innovative take on these malted grains,” said Steele. “After exploring their unique offerings, we realized that the Stochasticity Project would be the perfect avenue to incorporate them into a recipe.”

With a malt bill composed of seven grains—2-row pale malt, malted buckwheat, malted millet, white wheat malt, CaraRye, flaked oats and flaked triticale—there are distinct nutty and cereal-like malt qualities in the flavor and aroma. Columbus, Chinook, Centennial and Cascade hops (aka the “4 C’s”) were added to balance out the intense malt backbone, resulting in a blend of spice, citrus and pine flavors.

After brainstorming concepts and deciding on the final recipe, what came about next for this multigrain ale was highly unexpected. But then again, that should be expected from the Stochasticity Project, a series of beers intended for exotic notions, ingredients and ideas. A daring, slightly controversial name was proposed by the brewing team that references the title of a Saturday Night Live commercial parody, “Colon Blow.” Stone CEO Greg Koch shut it down. Hard. More names were floated. For a while it was Multigrains of Truth. Then Let It Grain. Someone on the sales team spoke up: “But we LIKE the name Colon Blow. It’s…hilarious!” Since they would be the ones selling it, Greg gave in.

Ultimately, the federal government nixed the name when it was submitted for approval, citing a perceived suggestion of health benefits. Um, OK. Plan B then: Grainiac.

This one-time limited release should be enjoyed fresh in order to fully experience the generous dose of hop character. The story of Stochasticity Project Colon B…errr…Grainiac will live on inside the brewery’s halls and on the back of every bottle.

There is no happenstance or coincidence. Dumb luck is a fallacy and randomness a commonly accepted mistruth. Much of what seemingly falls into place yet seems so natural is a result of Stochasticity, a concept embraced and exalted by this special and unpredictable series of beers where exotic notions, ingredients and ideas coalesce at an interesting and often unexpected endpoint.