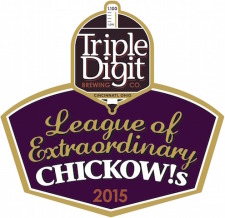 (Cincinnati,OH) – On their first time participating in the barrel aged only festival, Listermann Brewing Company’s high gravity label Triple Digit brings home a silver medal for their Barrel Aged Chickow! from Chicago. FoBAB is the festival of wood and barrel aged beers held annually in Chicago. There were over 350 beers across 12 categories and is one of the most prestigious beer festivals in the world.

Chickow!, the highest rated year round beer made in Cincinnati according to ratebeer.com, is a brown ale infused with hazelnuts. It is also one of 3 year round beers the brewery makes. “People really go crazy for Chickow!. We usually run out of it before the next batch is ready,” says Sales Manager Jason Brewer. He continues, “We even have a beer club centered around it where members get variations of it that are not available anywhere else including Irish Cream and Barrel Aged Vanilla.”

“It’s very comforting to see the amount of energy and excitement behind craft beer,” says head brewer Patrick Gilroy. He continues, “Festivals like this always energize us as brewers. Seeing glimpses of the creativity across the country is inspiring and reminds us not to be complacent with our offerings. Medaling among these beers is a great feeling.”

“This is the festival we want to win at,” says Brewer. He continues “The categories are broader and fit the unique styles of beer we make. I love barrel aged beers and seeing and tasting the beers that we beat makes me a proud papa.”

Listermann/Triple Digit is taking their Silver Medal winner on a victory tour and will be on tap at these select bars on the dates listed. All times are starting at 6pm unless noted:

Want exclusive access to the League of Extraordinary Chickow!s and the silver medal winner? is up online with only a few spots left at http://tripledigitbrewing.com/league/