(Brooklyn, NY) – 12 Beans. Three types of barrels. One day. Bean Day 2017 (Saturday, November 18th) celebrates the reincarnation of the original Mad Scientist take on the mythical bean-based beers of the Baltics: 3BEANS . This time the beer is aged in a fleet of Widow Jane Bourbon Barrels and then blended to perfection. In addition, two new raw and uncut Small Batch porters, the 4BEANS and 5BEANS, aged in rye whiskey and port barrels, respectively, will be released simultaneously. All three versions of the barrel-aged porters will be available in cans exclusively on Bean Day at Sixpoint Brewery, 40 Van Dyke Street, Brooklyn, NYC. 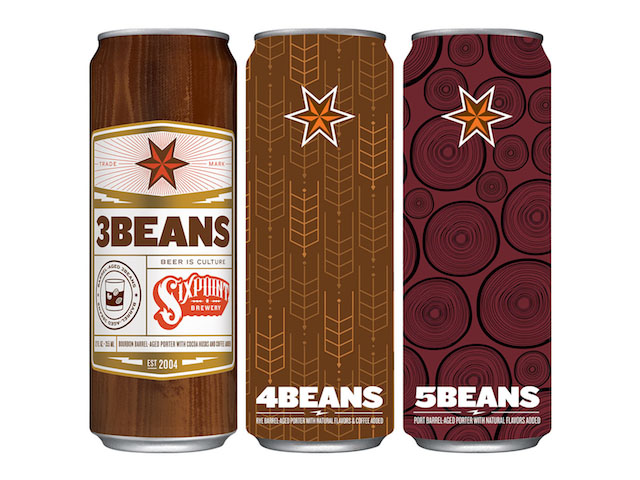 3BEANS is that subtle blend from the three base ingredients of the 3BEANS series: coffee, cacao, and romano beans. For this special barrel-aged version, the Mad Scientists carefully calibrated cold brew coffee, rich chocolate notes, and notes of oak and bourbon to round out the profile. The last time Sixpoint released 3BEANS was in 2012, and during the process of creating the beer, the brewery was slammed by Hurricane Sandy and knocked offline. “We could not think of a better way to reincarnate this beer,” claimed Shane Welch, the President and Founder of Sixpoint Brewery. “We tasted the 3BEANS with the team and a few other fans last week, and everyone thought it was baller. This entire project has been reinvigorating and represents the culmination of many different departments working together to make this a reality. I could not be more amped about what the Sixpoint team did to manifest this awesome trio of beers!”

4BEANS is more of a dessert beer, aged in rye whiskey barrels and laid on whole Madagascar vanilla beans (the 4th Bean). This first running beer is completely uncut, providing a velvety, rich, and full-bodied experience.

For 5BEANS, Sixpoint took the series in a new tangent from the original formulation. The original 5BEANS was a progression on the series, adding black cardamom to vanilla, chocolate, coffee, and romano. This specialty brew is a twist based on Baltic origins—the beans here are romano, poppy seeds, a touch of vanilla, chocolate, and sweet and tart cherries, and the beer is aged in port barrels.

The 4BEANS and 5BEANS are offered in very limited quantities and will be sold exclusively through Sixpoint’s mobile app. The 3BEANS will first be available for purchase at Sixpoint Brewery on Bean Day but will also see wider distribution throughout Sixpoint’s entire distribution network afterwards. The sales date for 4BEANS and 5BEANS will be Monday, November 13th and will start at 12pm EST. Those who have downloaded Sixpoint’s mobile app and successfully purchase on November 13th will be able to pickup their cases on Bean Day.

“Barrel-aged beers are a totally different animal than fresh beer. Even after you perfect the initial recipe, it takes rigorous sensory analysis to get the final barrel-aged and blended product exactly where it needs to be,” said Keir Hamilton, a Sixpoint brewer. “For the 3BEANS, we tested the blend ratios alphabetically and sequentially… at “T” we found perfection. We hope you enjoy!”

About Sixpoint Brewery: Sixpoint was born out of an 800-square-foot garage in Brooklyn, New York City, in 2004 by award-winning homebrewer-turned-professional Shane Welch, who had amassed over 1,000 individual homebrew recipes. The brewery’s name is derived from the ancient six-pointed brewers’ star, which had symbolically adorned the walls and equipment of ancient breweries since at least the Medieval period. Sixpoint’s motto is “Beer is Culture,” to highlight the human trajectory — the earliest human civilizations were founded upon the cultivation of cereal grains for making beer. Sixpoint aims to perpetually inspire the art, creativity and collaboration generated through beer by acknowledging the history of the craft, while forging ahead to inspire culture in a modern setting.