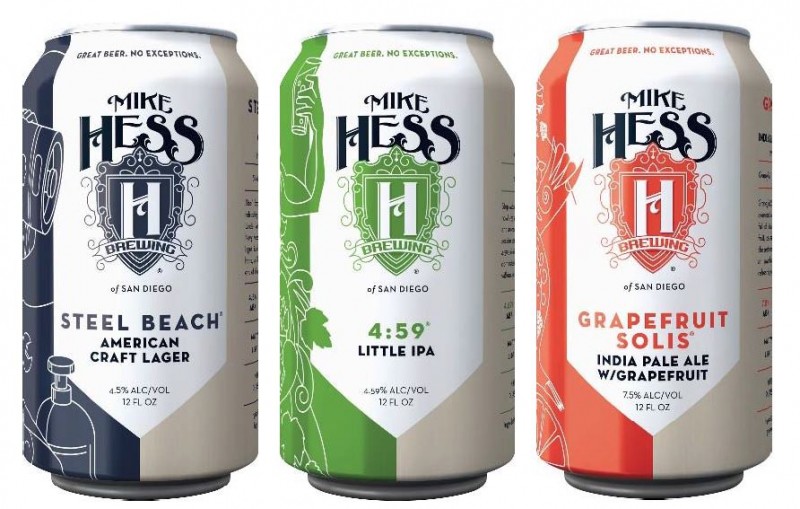 Starting May 25th, cans of MHB’s award-winning craft beers—in all of their sleek, modern, redesigned glory—will be available at craft-conscious retail sellers throughout MHB’s distribution footprint, which includes fine craft beer bars and retailers, including small family-owned outlets as well as national chain accounts, across California, Colorado, and Arizona.

“Retaining the heritage of our brand was critical in this brand evolution,” explained Mike Hess, brewery founder and owner. “The folks at Mth Degree [MHB’s brand redesign agency] were able to honor our tradition and established look, providing us with a cohesive and exciting packaging system that jumps off the shelf, speaks to customers, and is, quite frankly, world class.”

The changes to MHB’s cans are more than just aesthetic: Joining the already strong lineup of MHB’s canned beers are (1) Grapefruit Solis, a citrusy twist on a classic San Diego-style IPA, (2) 4:59, a crushable and satisfying “little” IPA, and (3) Steel Beach, a rewarding American craft lager.

“We’re excited that our business is nimble enough to quickly give the people what they want,” explained MHB National Sales Director Greg Hess. “Grapefruit Solis is one of our taprooms’ top sellers. Adding it to our canned line, along with our two brand new beers, is going to make a lot of people very happy.”

MHB’s canned beer offerings will continue to feature the Open Mike™ top, a full aperture opening that allows the drinker’s sensory experience to start as soon as the can is opened. The packaging for each new six-pack showcases how the Open Mike™ tops function, along with a true-color representation of the beer inside.

About Mike Hess Brewing
Mike Hess Brewing has grown to one of San Diego’s largest craft brewers over the past 7 years, having started as its smallest and first purposeful nano-brewery. One of the region’s first canning breweries, they have won numerous awards for their beers—28 in the past four years—including two Gold awards at the prestigious World Beer Cup (Habitus, Rye, 2014, Claritas, Kolsch-style, 2016). They operate three locations in San Diego, including their world-class brewery and tasting room in beautiful North Park.