(Hood River, OR) – Double Mountain Brewery & Taproom is proud to introduce the newest addition to their year-round craft beers: Hop Lion IPA. Currently available on draft and in bottles at the downtown Hood River Taproom and SE Portland Taproom in the Woodstock neighborhood. Hop Lion can be found throughout the Northwest and British Columbia, in early June. 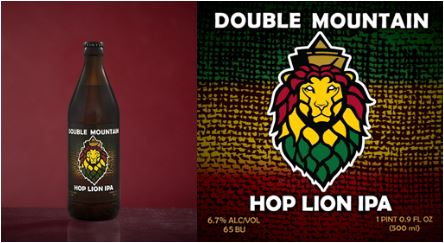 “We’ve been experimenting with various hop varieties and techniques for over a year on this new year-round IPA. I’m not sure what I like better; the beer or its inspirations of the vibe.” – Matt Swihart, Brewmaster

Tropic resin, tangerine
Petrichor and evergreen
Fill your chalice, fill it wide
Then pass it upon the left hand side

Description: Tropic resin, tangerine, evergreen, and the earthy scent of Northwest petrichor leap from the nose of this proud IPA. Tangelo and fresh bread stalk closely behind, finishing with orange and dank pine.

About Double Mountain Brewery and Taproom: Double Mountain Brewery and Taproom was established in 2007 in the heart of downtown Hood River, OR. Founder Matt Swihart opened the brewery with a clear mission: make great beer for craft beer fans. Their unique location lends to not only using pure and clean glacial water for their beers, but they also take advantage of regionally grown hops. With their reusable bottle program, customers love the softer environmental footprint and know they are part of a solution to sustainability. They can be found on tap and in bottles throughout the Pacific Northwest and British Columbia.