Saint Arnold Brewing’s Pet Project, Ale Wagger, Is A Beer With A Purpose 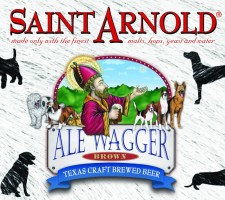 As part of its Ale Wagger efforts, Saint Arnold has teamed with the City of Houston’s BARC Animal Shelter and Adoptions to encourage responsible pet ownership and urge the craft beer community to adopt homeless animals. Specifically, proceeds from Saint Arnold Ale Wagger will support BARC’s spay/neuter initiatives through donations to the Houston BARC Foundation. The brewery also will host an Ale Wagger pet adoption event to coincide with its weekend tour at 11 a.m., Saturday, October 4th.

“This partnership will engage another segment of the community in the ongoing effort to reduce the number of homeless animals roaming our streets and promote pet wellness,” said Houston Mayor Annise Parker. “These are big challenges and I encourage others to follow Saint Arnold’s excellent example of community involvement.”

“Houston has a serious issue with unwanted dogs and cats, and we saw this as an opportunity for Saint Arnold and the craft beer community to make a difference,” said Saint Arnold Founder/Brewer Brock Wagner. “With five rescue animals in our house, we can attest to the love and affection these animals bring. Ale Wagger is just part of our commitment to working on this issue in every community in which Saint Arnold is involved.”

Saint Arnold Ale Wagger is a deep copper brown ale. It has a full, malty body with hints of chocolate, a touch of sweetness and a light hop flavor. Five different types of malts combine to create a complex malt character. It has a rich, creamy head with a fine lace. The light fruitiness, characteristic of ales, is derived from Saint Arnold’s proprietary yeast strain.

About Saint Arnold Brewing Company
Saint Arnold Brewing’s 17 brews are made and sold by the company’s staff of 69 dedicated employees. Ranked 48th on the Brewers Association list of top craft breweries, Saint Arnold was listed by USA Today as one of the “10 great places to see what’s brewing in beer,” and Smart Meetings magazine named it among the “Top 5 breweries to host an event.” Saint Arnold is located at 2000 Lyons Avenue and its brewery tour and tasting is offered every weekday at 3:00 P.M. and Saturdays starting at 11 A.M. For more information on Saint Arnold’s seven year-round and five seasonal beers as well as root beer, log on to