San Diego, CA – Today, Green Flash Brewing Co. co-founders Mike and Lisa Hinkley officially announce that the San Diego-based craft brewery’s annual “Treasure Chest” program, an annual beer release and event series to raise funds for breast cancer charities will reach 30 US cities from coast to coast through the end of October. On Sept 6th, Green Flash kicked off the fundraiser by hosting over 600 guests at the 4th annual San Diego Treasure Chest Fest – a rare beer and food pairing extravaganza at the So Cal brewery. Next month, Treasure Chest Fest will be replicated on the future site of the Green Flash East Coast brewery (slated to open in 2016). Each year, the San Diego festival debuts a Green Flash Treasure Chest beer – the 2014 edition is a pink-hued Barrel Aged Saison with Plum that will be featured on tap at every Treasure Chest event through the end of October 2014. Green Flash will donate one dollar from every full pour of Treasure Chest beer sold to a breast cancer charity in each of the cities where events are being held. 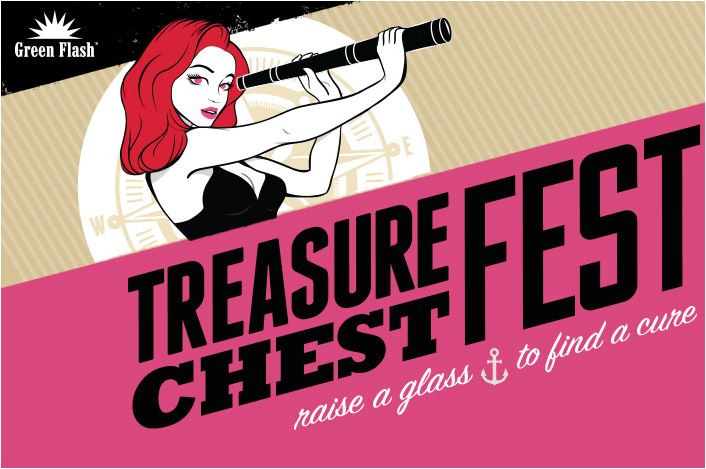 Raising money for the fight against breast cancer is a cause which is near and dear to the hearts of everyone at Green Flash. Brewery Co-Founder and Vice President of Marketing, Lisa Hinkley is a breast cancer survivor and is passionate about helping others whose lives have been affected by this disease. To date, the Treasure Chest program has raised over 90K for breast cancer charities nationally through beer sales, festivals and contributions from their partners.

“The momentum and excitement for this fundraiser grows stronger with every passing year and in 2014, we have many reasons to celebrate,” exclaims Lisa Hinkley. “I am now 4-years cancer-free, and to date, we have raised over 90,000 dollars for regional Breast Cancer charities through our national Treasure Chest program. By securing the support of the beer community, Green Flash fans and our retail partners, I know this year we can exceed our fundraising goals.”

Following are some highlights and details about the 2014 Green Flash Treasure Chest national charity program:

ABOUT THE BEER: Treasure Chest 2014 | Barrel Aged Saison with Plum:

The Treasure Chest 2014 beer is a Barrel-aged Belgian Style Saison with Plum. This specialty beer is fermented in red wine barrels with house Brettanomyces, then conditioned with plums for six months. This enticing blend emerges with an appropriately pink hue, delicate notes of plum and almond, and is balanced by subtle tannins drawn from the barrel and wild yeast. A mouthwatering and tart rosé-like finish rounds out Treasure Chest 2014, an exceptional barrel-aged offering.

About The Treasure Chest Program:
Green Flash Co-Founder, Lisa Hinkley is celebrating 4-years breast cancer free. Lisa & Mike Hinkley and the entire Green Flash organization are thrilled to present the 1st annual Virginia Beach Treasure Chest Fest, raising money and awareness for Susan G Komen, Tidewater, helping others affected by the disease in their new community. To date, the program has raised over 90,000 dollars for Breast Cancer charities from coast to coast. The momentum and excitement for this national fundraiser grows stronger with every passing year, and this year Green Flash looks forward to raising a glass to find a cure while celebrating the charitable spirit of the craft beer community.

About Green Flash Brewing Co:
Green Flash Brewing Co., is headquartered in San Diego, California, and was founded in 2002 by Mike and Lisa Hinkley. Brewmaster, Chuck Silva, leads brewing operations. Green Flash is an award-winning brewer of fine, hand-crafted ales, and specializes in brewing assertive and distinctive beers, such as the nationally acclaimed West Coast I.P.A.: an award-winning beer whose wide acceptance has helped define a category. Green Flash brews ten styles of beer regularly, on draught and in bottles as well as a growing lineup of seasonal and special offerings, including several barrel-aged beers, throughout the year. The brewery plans to open their 2nd full-scale brewing operation on the East Coast in Virginia Beach – scheduled to open in 2016.

Saint Arnold Brewing’s Pet Project, Ale Wagger, Is A Beer With A Purpose Wouldn’t You Like To Know What Texas Beer Refinery Is Bringing to GABF 2014