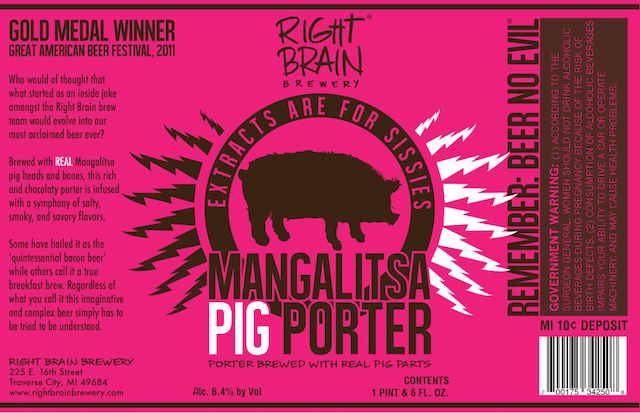 The Mangalitsa Pig Porter is not a “bacon beer.” Brewed with smoked Mangalitsa pig bones, this beer is loaded with smoky flavor and natural pork oils from the bones themselves. No smoked malts are used, and no pork extracts are added. The flavor in this porter comes directly from the smoked pig bones.

However, there’s no charge to attend the party! The Mangalitsa Pig Porter release party is a free, family-friendly event, starting at 12PM on Saturday, April 18th. Live music from Moxieville will start at 5PM, with Grand Rapids based Rock-a-Billy group Delilah DeWyld and the Lost Boys closing out the evening.

Mangalista Pig Porter will be available on draft and in 22oz bottles during the release party. In addition, for the first time in Pig Porter history, customers will have the opportunity to purchase UNLIMITED CASES of this exclusive Porter.