(Bethlehem,PA) – On April 15th, we’ll be celebrating our 17 year Anniversary at the Bethlehem Brew Works and brewing quality, craft beer in the Lehigh Valley. We really can’t believe it’s been 17 years!

Thinking back to those first weeks and months and how far we’ve come – from brewing for one restaurant to producing and distributing our craft beers all over PA and NJ. The Fegley family, Brew Works Management and Staff are unbelievably thankful to all of our customers, friends, and family who have made us successful for the past 17 years. 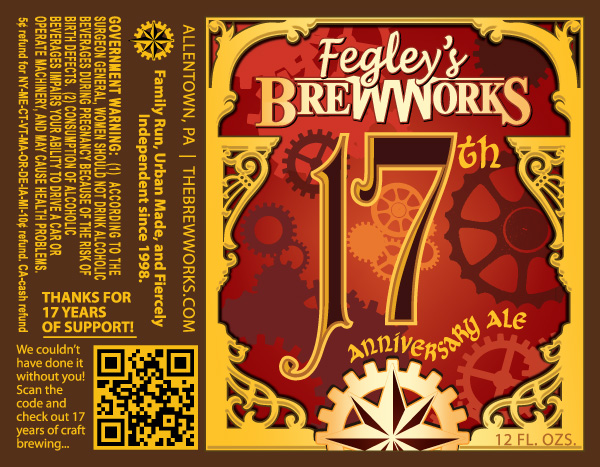 Fegley’s 17th Anniversary ale is a barley wine, deep mahogany in color, with an assertive hop character balanced by the perfect amount of malt flavor. This beer is perfect for aging or enjoying now. 10.5% ABV | 1.100 OG | 100 IBU

Happy Hour 5pm to 7pm featuring $1 off Flagship Beers and $2 off Appetizers in the Steelgaarden Lounge or main bar area.

17% OFF all food purchases to REWARDS CLUB and MUG CLUB MEMBERS!
HALF OFF all Brew Works Wearable Gear – tshirts, hats, and more to ALL CLUB MEMBERS!
*offers good at the Bethlehem Brew Works on April 15th to Rewards Club and Mug Club Members only. Need a Rewards Club Card? Sign up is easy and free, ask any Brew Works employee for details. More info.

Fegley’s Brew Works opened the doors of the Bethlehem Brew Works on April 15th, 1998. Seventeen years later, they now operate 2 brewpubs, as well as Fegley’s Coffee Works and Fegley’s Burrito Works in the Lehigh Valley and have a full service, award-winning brewing and bottling facility at the Allentown Brew Works that distributes to all of PA and NJ led by Brew Master Beau Baden. Over the years, Fegley’s has won numerous awards for the brewing mastery of Beau Baden, a Scranton, PA native.

Fegley’s Brew Works has been honored throughout its seventeen years with accolades for their food and drink as well as their dedication to the community. They also dedicate their business as a model of sustainable business practices by recycling, upcycling, and composting waste material. Their distribution brewery and brewpub is run by wind and solar 100% renewable energy sources.