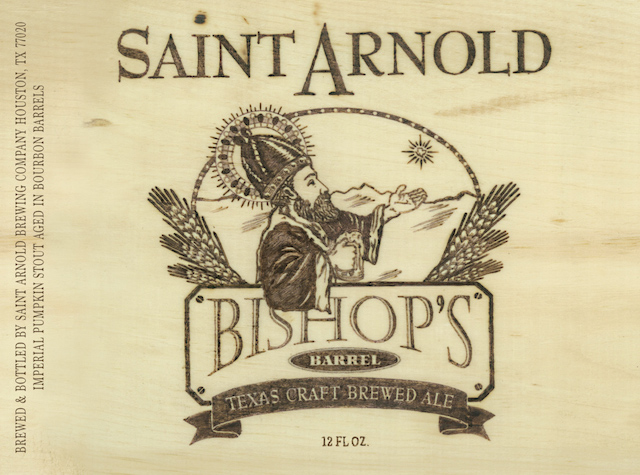 As a medium-full body beer with a soft mouthfeel, Saint Arnold Bishop’s Barrel No. 9 pours a dark brown to black color with a tan head. The nose is pumpkin spice up front with oak, bourbon, vanilla and dark fruit in the background. The taste starts with sweet chocolate and pumpkin spice up front and finishes with a bit of alcohol heat and spices.
“We specifically chose these barrels for BB9 to complement the characteristics of the beer and to add another layer of flavor from the wood,” said Saint Arnold Founder/Brewer Brock Wagner. “It has been two and a half years since we bottled our first Bishop’s Barrel beer and we are enjoying the creative freedom that this series gives us. We love that the beer community gets as excited about these releases as we do.”

Each beer within the series is produced in small quantities and is only available in pubs and restaurants throughout Texas and Louisiana in 12 ounce bottles and on draft.

Saint Arnold Brewery, on the northern fringe of downtown Houston, features a 2,000 square foot barrel room that accommodates more than 200 barrels from California and Kentucky. Currently, the brewery is aging old ales, barley wines and imperial IPAs in its barrel room for future Bishop’s Barrel releases. Saint Arnold uses the barrels one time before they are retired.

Saint Arnold Brewing’s 16 brews are made and sold by the company’s staff of 74 dedicated employees. Ranked 46th on the Brewers Association list of top craft breweries, Saint Arnold was listed by USA Today as one of the “10 great places to see what’s brewing in beer,” and Smart Meetings magazine named it among the “Top 5 breweries to host an event.” Saint Arnold is located at 2000 Lyons Avenue and its brewery tour and tasting is offered every weekday at 3:00 P.M. and Saturdays starting at 11 A.M. For more information on Saint Arnold’s eight year-round and five seasonal beers as well as root beer, log on to www.saintarnold.com.