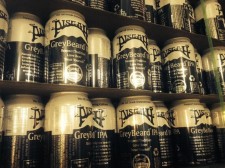 Black Mountain, NC – Pisgah Brewing Company is set to release their second can offering to the Buncombe County area in the form of their flagship IPA, GreyBeard IPA. The West Coast-style recipe has quickly become their second best seller behind the infamous Pisgah Pale Ale, and with their own canning line now in operation Pisgah plans to release GreyBeard IPA in 6-packs of 12oz cans on Wednesday, September 10th at participating locations in Buncombe County.

Pisgah Brewing Company made a major change in their beer line-up in 2013 when they chose their west coast-style IPA recipe to replace their traditional English-style strong ale recipe as their flagship IPA. The hoppy delight took their supporters by storm so quickly that the brewery switched gears to make room for the new flagship IPA and named it GreyBeard IPA for the local mountain in their home-town of Black Mountain, NC.

Pisgah began their foray into the canning package in January of 2014 when they released Pisgah Pale Ale in 6-pakcs of 12oz cans. The process began with a mobile-canning line run by Land of the Sky Mobile Canning, yet all Greybeard IPA cans will be packaged with Pisgah’s newest canning line, installed just weeks ago at their Black Mountain location.

Greybeard IPA will be available in participating retailers where Pisgah Pale Ale 6-packs can be found. The initial drop of Greybeard 6-packs will happen next Wednesday, September 10th.