(Hershey,PA) – Our limited fall beer, Master of Pumpkins, is coming along quite nicely! Earlier this week, we harvested a quarter-acre of beautiful neck pumpkins from Strites’ Orchard in Harrisburg, PA. Our Snack Bar staff is gearing up to roast the pumpkins in-house, and we plan to brew the beer during the first week of September with a late September release. Each year, Master of Pumpkins proves to be a true collaboration between our brewing team, Snack Bar staff, and Strites’ Orchards. The result is a labor of love that captures the true essence of the fall season. Master of Pumpkins will be available in 4-packs and cases of 375mL cork and cage bottles, as well as limited draft availability throughout our entire distribution footprint. 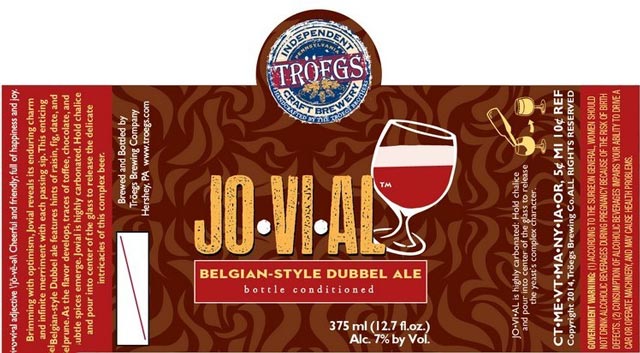 We’re also pleased to provide a sneak peek of the second year-round release in our 375mL cork and cage series – Jovial! Brimming with optimism, this enticing Belgian-style Dubbel Ale reveals its enduring charm and infinite merriment with each passing sip. Fermented with Westmalle yeast to contribute hints of dark fruit (think raisin, fig, date, and prune), the flavor develops to add traces of toffee, chocolate, and subtle spices. Earlier this month, we completed a test packaging run of Jovial, which will require a few weeks of bottle conditioning before it hits the shelves in retailers. The bottle conditioning process naturally carbonates the beer right inside the bottle, which produces a lively effervescence once the cork is popped. Like LaGrave, Jovial will be available in 4-packs and cases at select retailers throughout our entire distribution footprint. Stay tuned for more information including release dates.

Scratch Beer Update
To commemorate the forthcoming German Oktoberfest season, we’ve recently released Scratch #157 – Fest Lager at the brewery. With a more noticeable hop presence than most typical Festbiers, Scratch #157 still maintains the classic malt character that you’ve come to expect from the style. Draft and growler fills are available in the Tasting Room, and cases and 6-packs can be purchased through the General Store. On Thursday, September 4, we will release two new Scratch Beers: #158 – Belgian-style Pale Ale and #159 – Kölsch. Both releases are limited to draft and growler fills through the Tasting Room. Also on deck is our annual Fresh Hop Ale brewed with wet, whole flower hops flown in directly from the Yakima Valley in Washington. And if our annual fresh hop beer has you salivating and craving more, we’ll have another Fresh Hop Ale in the coming weeks, which will feature fresh regional hops from Black Locust Farm in Northern Baltimore County, Maryland.