(BURLINGTON, ON) – Nickel Brook announced today that its annual collaboration with Sawdust City is an Imperial Sour with Soursop fruit, to be released on November 5. Known as 11.05, the beer has become a tradition between brewmasters and friends Ryan Morrow (Nickel Brook) and Sam Corbeil (Sawdust City), who share the November 5 birthday. As always, this year’s batch will be released on Sunday November 5 through Nickel Brook’s Bottle Shop and on-tap at the Sawdust City Saloon. Limited kegs will be tapped at better beer bars across Ontario the following week. 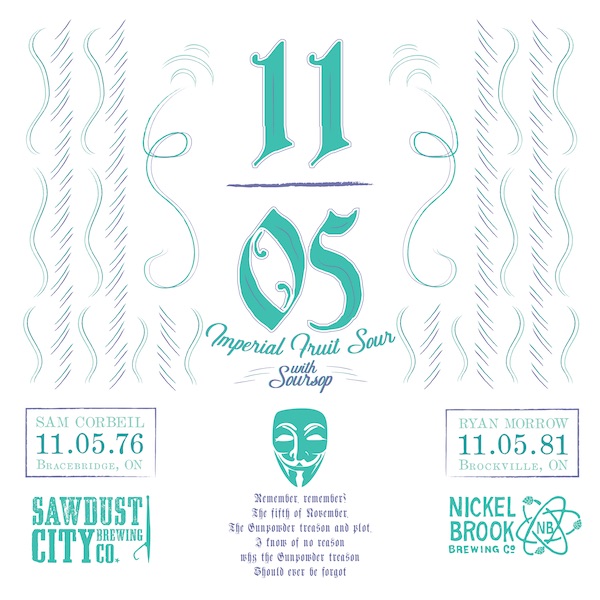 “We’ve really been working on a lot of great sours here at Nickel Brook, so we wanted to bring that into the mix this year” says Brewmaster Ryan Morrow. “Getting to 11% just means lots more malt and a bit of added sugar, and then Sam had the idea of using this Soursop fruit which gives the beer a really unique tropical flavor and creamy mouthfeel.”

Previous incarnations of 11.05 have included an Imperial Saison, a Belgian Triple and a Triple IPA, each brewed to 11.05%. This year’s batch will be released through the Nickel Brook Bottle Shop in Burlington in 375ml bottles and will retail for $4.50/bottle. Only 3000 bottles will be available.

About Nickel Brook Brewing Co.
Nickel Brook Brewing Co. was founded by John and Peter Romano in Burlington, Ontario in 2005. They expanded operations to Hamilton, Ontario when they co-opened the Arts and Sciences Brewery with Collective Arts Brewing, and are in the process of building a destination brewery in the Niagara Region. They are committed to using only the finest natural ingredients from around the world, and brew them in small batches for the highest standard of quality. Nickel Brook continues to be an award-winning Ontario craft brewery that constantly strives to push the boundaries of brewing culture.
864 Drury Ln, Burlington, Ontario
www.nickelbrook.com/ @NickelBrookBeer