(Houston, TX) – “Raspberry Are Fun” “Raspberry Are Fruit” “Raspberry Ain’t Fake” are all acceptable phrases to describe Saint Arnold Brewing Co.‘s newest canned release, Raspberry AF. With 3,000 pounds of real fruit purée added to each batch of Boiler Room Berliner Weisse, the raspberries create a pleasantly tart sour beer that will be available in cans and on draft in stores, bars, and restaurants across Texas and Louisiana next week. 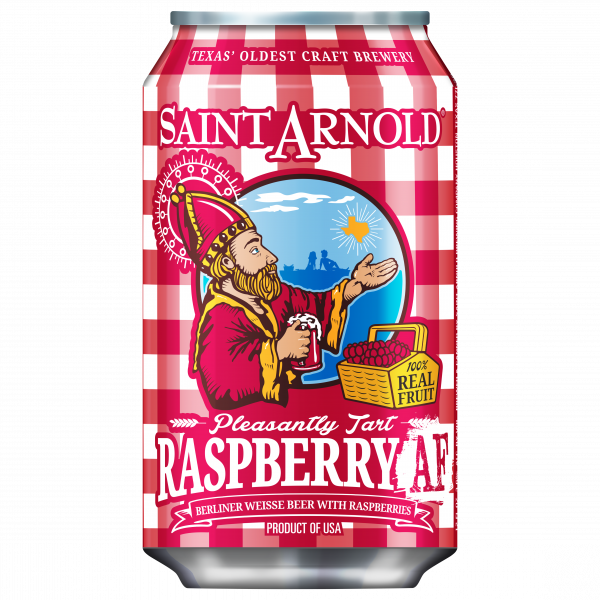 With the equivalent of 405,000 individual raspberries in each beer batch, one could make over 255,000 raspberry cupcakes, or 2,664 raspberry pies, or 2,132 jars of raspberry jam. The possibilities are endless, but Saint Arnold is happy to use the raspberries to add another flavor to their award-winning beer lineup.

“This beer is the most technically challenging that we brew between the kettle souring and the secondary fermentation with raspberries,” said Brock Wagner, Saint Arnold Brewing Co. Founder/Brewer. “It is important to me that we use only real raspberries as opposed to a fruit extract even though the raspberries are several times more expensive. The result is an amazingly refreshing yet bright and fruity beer. And the color is 100% from the raspberries!”

Raspberry AF was born from the brewers experimenting with Boiler Room Berliner Weisse, originally filling eight red wine barrels and adding a different fruit to each barrel. The barrel filled with raspberries was the unanimous winner. RAF was the internal working name for the beer and the name wasn’t meant to leave the brewery. After several Raspberry AFs one evening six months ago, Wagner went to Twitter to ask whether people preferred “Raspberry Boiler Room” or “Raspberry AF” as a name. The results were 75 to 1 in favor of Raspberry AF. The moral of the story is know your medium before you ask a question.

“It’s an upfront, thirst-quenching raspberry delight that leaves your mouth wanting more,” said Stephen Rawlings, Brewing Operations Manager for Saint Arnold, and the brewer who developed this recipe. “At a sessionable 3.7% ABV, it is tempting to help yourself to plenty more.”

Raspberry AF will roll out in the coming weeks to Texas and Louisiana markets in 12 oz cans and on draft. For optimal tasting, crack open a can during a barbecue with friends and family.

About Saint Arnold Brewing Company
Saint Arnold Brewing’s 11 year-round beers, seven seasonals and three special series – Divine Reserve, Icon and Bishop’s Barrel – are made and sold by the company’s staff of 80 dedicated employees. Saint Arnold beers have won 21 medals at the Great American Beer Festival. The brewery on the north side of downtown Houston was listed by Thrillist among the best breweries in America for eating, and Smart Meetings magazine named it among the top breweries to host an event. Saint Arnold is located at 2000 Lyons Avenue and its beer hall open at 11 A.M. Monday through Saturday.