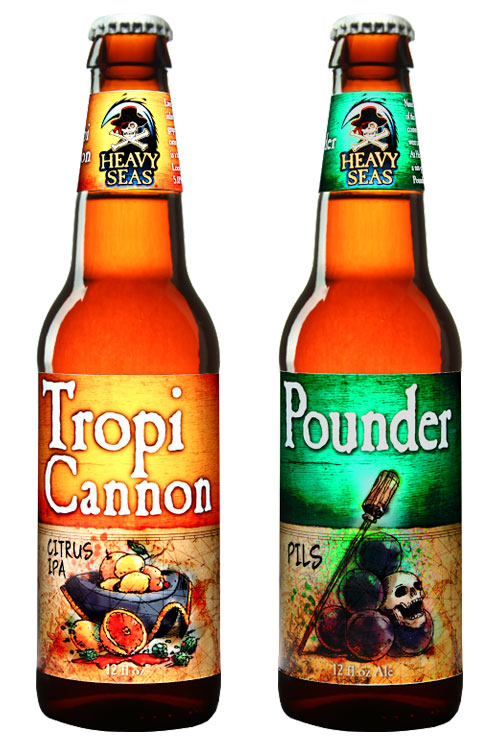 A variation on the brewery’s flagship beer, Loose Cannon IPA, the new citrus IPA showcases explosive tropical fruit aromas and flavors. TropiCannon clocks in at the same 7.25% ABV as its cousin, but has a modified hop profile, and is augmented with blood orange, grapefruit, mango and lemon flavors.

“We’ve introduced grapefruit, orange, and lemon peel in the brewing process and added mango, blood orange, and more grapefruit post-fermentation,” said Heavy Seas Founder, Hugh Sisson. “Fruit nuanced IPAs are gaining popularity these days and we are excited to add this new beer to our portfolio.”

The specs on Loose Cannon IPA are:

“It’s always exciting watching our brewers develop a new product,” said Sisson. “It’s one of the most creative and fun parts of the business.”

Made with Czech malts and a plethora of European hops, Pounder Pils is an American interpretation of the classic European Style. Exhibiting a crisp malt backbone and an herbaceous hop profile, the beer is refreshing yet still complex.

“I have been looking forward to making this beer for a long time,” said Brewmaster Chris Leonard. “True Pilsner is a challenging style – the flavor profile has to be perfectly balanced. There is very little to hide behind.”

The specs for the new product are:

“The cannon balls on a sailing ship during the age of sail were named for their weight,” said Heavy Seas Founder, Hugh Sisson. “A common size weighed 6 pounds, and would be called a ‘6 pounder’, so we thought it entirely appropriate to make that the name of our new 5% Pilsner – which is, after all, a very ‘poundable’ style of beer!”