(Atlanta, GA) – New Realm Brewing‘s anticipated Beltline-adjacent beer garden is now open, offering 85 additional seats for outdoor casual entertainment. Atlantans can now literally step off of the Beltline’s east side trail and sip on a craft beer with friends while they watch the hustle and bustle of the busy Beltline pass by. 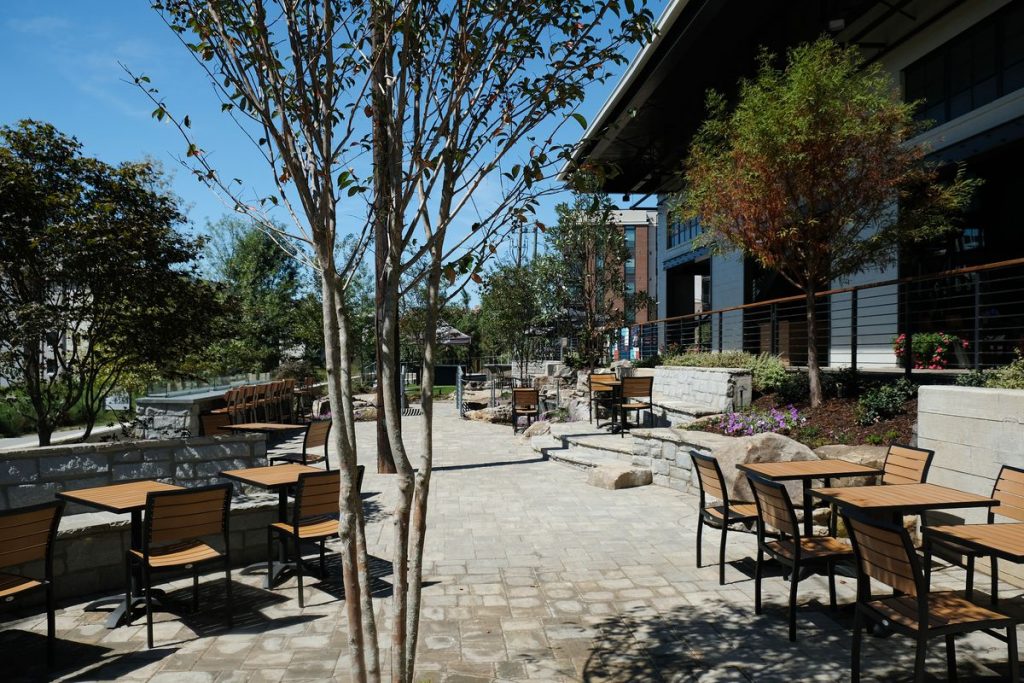 “We are ecstatic to have this final piece of our brewery open for patrons to enjoy,” said Carey Falcone Co-Founder and CEO of New Realm Brewing. “Though the views of Atlanta from our rooftop are incredible, there is something special about sitting and enjoying a conversation with a beer and some food along the thriving Beltline. The beer garden completes our vision for the brewery.”

New Realm Brewing’s beer garden includes stone seating with fire pit tables, creative water features, stone pavers and over 200 newly planted trees and bushes. Patrons can enjoy the full menu for both food and beer while taking in the Beltline scenery and action. A ramp has been added for easy accessibility to the beer garden, lower patio and restaurant.

New Realm Brewing is located at 550 Somerset Terrace NE (30306) with reservations accepted via OpenTable on New Realm’s website or by calling 404-968-2777. For a complete list of hours, information on private events and public tours, as well as additional information, visit newrealmbrewing.com.

About New Realm Brewing:
New Realm Brewing Company is an American craft brewery started in 2016 by co-founders Carey Falcone, Bob Powers and Mitch Steele. On a mission to rethink tradition and bend the rules, the team planted their first production facility in a 20,000-square foot space on Atlanta’s east side Beltline trail, featuring a 25hl brewhouse, 3,000 square foot restaurant, rooftop patio and beer garden. A second location opened in Virginia Beach mid-2018 enabling New Realm to increase their ability to innovate and create new beers. The Virginia Beach location is a 58,000-square foot space providing an additional 40,000 barrels of annual capacity. Like Atlanta, the second location features a large outdoor beer garden, private event space and a tasting room. Renaissance man and brewing legend, Mitch Steele received the Russell Scherer Award for Innovation in Brewing in 2014 and co-authored the book IPA: Brewing Techniques, Recipes and the Evolution of India Pale Ale in 2012. New Realm Brewing’s core principles are quality, creativity, authenticity, and striving for perfection, all with a customer-centric commitment and approach.