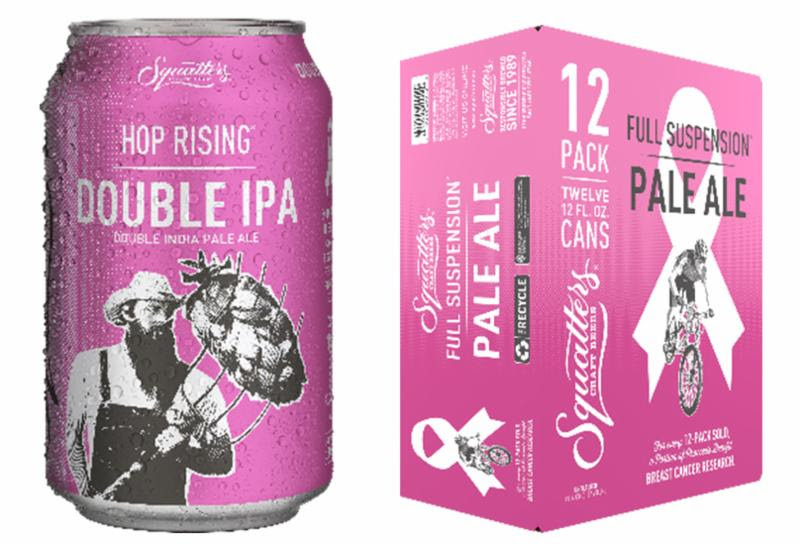 Squatters’ number one selling brand – Hop Rising Double IPA – will wear a pink can for the entire month of October. Squatters Craft Beers has pledged to donate $0.05 for each special can sold during the campaign. New in 2018, Squatters will double down and donate a portion of proceeds from special pink-canned Full Suspension Pale Ale 12-packs. “We are excited to include an additional Squatters package this year to support the American Cancer Society and generate much-needed funds to combat this devastating disease,” says Senior Marketing Manager for Squatters Craft Beers, Amy Tangaro.

Alongside or in memory of the women in their lives who have been touched by cancer, Real Men Wear Pink advocates will rally to raise funds and awareness during the month of October. Activists are encouraged to don their pinkest gear, mobilize their communities and compete to become the top fundraiser in support of lifesaving research and patient-supporting services.

Squatters Hop Rising is currently sold in 19 states and the pink cans will be distributed throughout, including in Squatters’ home state of Utah, where Hop Rising reigns as the top-selling craft beer in the market. Squatters Full Suspension Pale Ale pink 12-packs will make an appearance in 7 states and are expected to go fast. “Hop Rising and Full Suspension are two of our most-loved and best-performing beers, and the response we had from last year’s ACS campaign was enormous. We’re excited to be partnering again in 2018,” adds Squatters Craft Beers Chief Operating Officer, Adam Curfew.

According to the ACS Cancer Facts & Figures 2017, an estimated 1,460 women in the state of Utah will be diagnosed with breast cancer and an estimated 270 will die from the disease this year.

To read the personal story of how cancer has affected the life and family of Squatters’ salesperson, Keith Riekena, visit http://main.acsevents.org/goto/keith

For more information on the American Cancer Society Real Men Wear Pink campaign, click here or contact Colt Jarvis with ACS at 801-493-4730 or via email at [email protected].

Squatters and Wasatch packaged and draft beers are available in 19 states. For more information, please visit www.squatters.com and www.wasatchbeers.com.