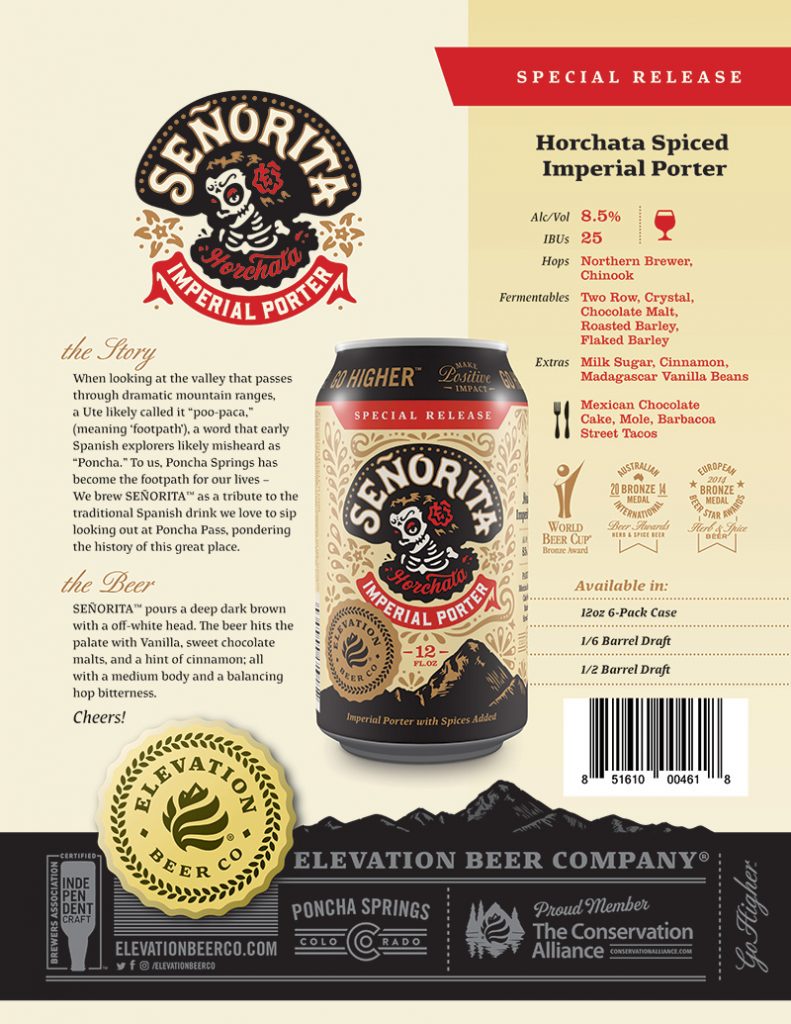 Available just in time for Día de los Muertos and as these cooler autumn months call for big, rich, flavorful beers; this horchata imperial porter delivers aromas of vanilla, cinnamon, and sweet milk to stir up images of the delicious Mexican drink of this beer’s namesake.

Señorita pours an off-white head with a deep dark brown body and is carefully balanced with hop bitterness from the inclusion of Northern Brewer and Chinook Hops. Sweet chocolate malts and hints of cinnamon spice compliment 8.4% ABV and 25 IBU of this Imperial Porter.

When looking at the valley that passes through dramatic mountain ranges, the Ute likely called it ‘poo-paca’ (meaning ‘footpath’), a word that early Spanish explorers likely misheard as ‘Poncha.’ To Elevation, Poncha Springs has become the footpath for our lives – we brew SEÑORITA™ as a tribute to the traditional Spanish drink we love to sip looking out at Poncha Pass, pondering the history of this great place.

About Elevation Beer Co.
Proudly operating in the remote mountain town of Poncha Springs, Elevation Beer Co. is more than just a beer company— we are a family, a community, and a collective of ordinary people doing extraordinary things. Dedicated to creating sustainable, meaningful careers in rural Colorado, we take the preservation of our home as seriously as we do the quality of our beer. Taste our flagship 8 Second Kolsch and a lineup of other usual suspects and seasonals at our tasting room, and in canned 6-packs and specialty bombers across Wyoming and soon Utah.