(New Glarus,WI) – From out of the Wild Fruit Cave, New Glarus Brewing Company welcomes Oud Bruin 2016 to its line of fine brews. This complex Flanders style ale is a tart and sweet brew with notes of toffee and fruit and an oaky finish. 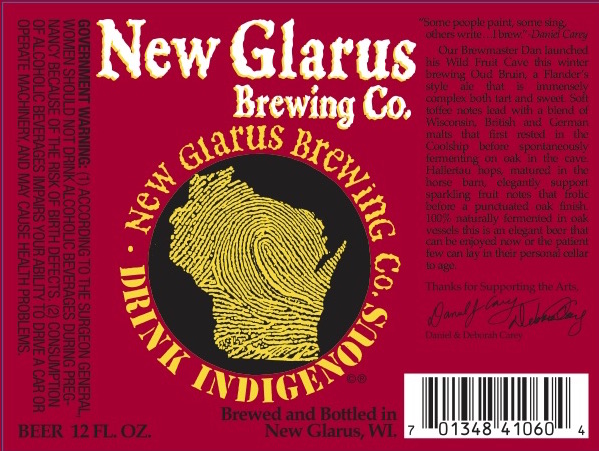 Diploma Master Brewer Dan Carey blended Wisconsin, British, and German malts that first rested in the Coolship before spontaneously fermenting on oak in the Wild Fruit Cave. He used Hallertau hops that had matured in the horse barn, giving Oud Bruin’s sparkling fruit notes that frolic before a punctuated oak finish. Oud Bruin 2016 is 100% naturally fermented in oak vessels.

New Glarus Founder/President Deb Carey notes “Oud Bruin 2016 is an elegant beer that can be enjoyed now or the patient few can lie in their personal cellar to age.”

The New Glarus Brewing Company was formed in 1993 by Daniel and Deborah Carey, who combined their considerable talents of brewing great beer and business management skills to build a a state of the art award winning brewery that still honors the history and traditions of the Village of New Glarus. Dan and Deb Carey have worked hard to maintain their philosophy based on individuality, cooperation and the employment of 100% natural ingredients to produce world-class handcrafted beers for our friends…. Only in Wisconsin!