(New Glarus,WI) – With the coming of Spring, New Glarus Brewing Company is proudly introducing, HOPSTER! Hopster is Diploma Master Brewer Daniel Carey’s newest Hopped Wheat creation. This living beer is the return of the popular Crack’d Wheat; the marriage of a sophisticated Bavarian Hefeweiss and an American Pale Ale. 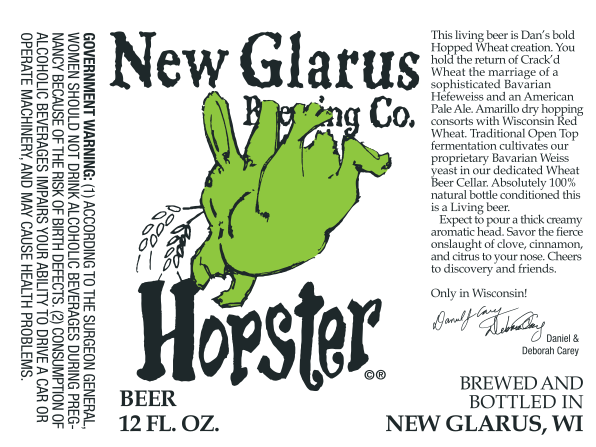 Hopster pours with a thick creamy and delightfully aromatic head. A sip will bring the fierce onslaught of cloves, cinnamon and citrus to your nose.

Founder/CEO Deb Carey notes that this is a 100% living beer for everyone to enjoy and says, “Cheers to discovery and friends!”

As always, Hopster is only available in Wisconsin!

The New Glarus Brewing Company was founded in 1993 by Daniel and Deborah Carey who combined their considerable talents for business management and brewing great beer to build an award winning brewery honoring the traditions of the New Glarus Village. Dan and Deb have worked hard to maintain a philosophy based on individuality, cooperation and the use of 100% natural ingredients producing world-class handcrafted beers for our friends in Wisconsin.