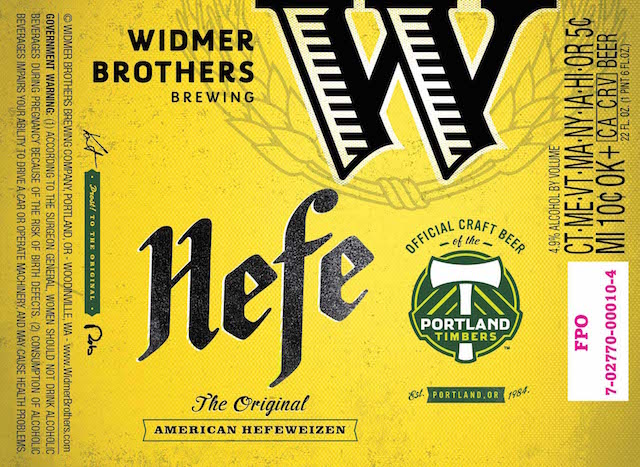 Widmer Brothers and the Portland Timbers have been partners for more than 15 years, and the two organizations announced a four-year renewal of their partnership today. In addition to co-branded Hefe packaging, the Widmer Brothers Southern Front at Providence Park will soon feature new prominent Hefe in-stadium signage and field-level LED board displays. Most notably, the southwest corner of the stadium will feature a 16-foot tall Hefe glass.

“My brother Kurt and I, as well as many of our brewers and other members of our team, are longtime fans of the Portland Timbers,” said Rob Widmer, co-founder of Widmer Brothers Brewing. “We are excited to continue our partnership and bring together two Portland originals for beer drinkers and soccer fans in Oregon with the Timbers and Hefe co-branded package. The Timbers are a great Portland institution, and we’re happy to continue our support and association with the team.”

The co-branded Hefe and Portland Timbers packaging will be featured on 6-packs and 12-packs in Oregon from now through the close of the 2015 MLS Season.

Widmer Brothers Brewing was founded in 1984 in Portland, Ore. Brothers Kurt and Rob Widmer, with help from their dad, Ray, helped lead the Pacific Northwest craft beer movement when they began brewing unique interpretations of traditional German beer styles. In 1986, Widmer Brothers Brewing introduced the original American-style Hefeweizen, which elevated the brewery to national acclaim. Since then, Hefe has grown to become Oregon’s favorite craft beer and the brewery has continued to push the boundaries, developing beers with an unapologetic, uncompromised commitment to innovation.