(SAN FRANCISCO/FORT COLLINS) A group led by New Belgium Brewing Company has entered into an agreement to purchase the assets of San Francisco’s iconic Magnolia Brewing as part of a bankruptcy proceeding. The newly-formed partnership will be a majority-owned subsidiary of New Belgium, with Elysian Founder Dick Cantwell and Belgian lambic producer Oud Beersel as minority partners. The partnership will continue to operate both Magnolia locations with existing staff and brands. Cantwell will head up brewing operations, working alongside Magnolia founder Dave McLean, who will be an employee of the partnership. It will be Dick’s first brewing gig since leaving Elysian in April of 2015 after its acquisition by Anheuser-Busch InBev. 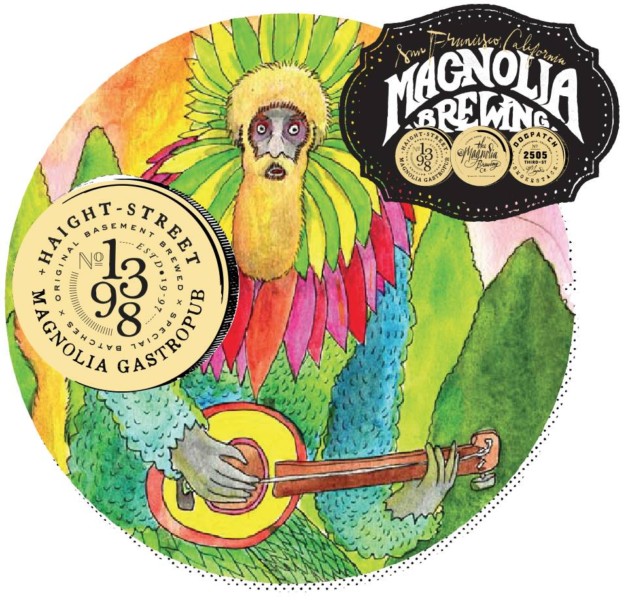 “I’m tremendously excited to be back in the beer business and looking forward to working with the team at Magnolia to develop new beers and new ideas,” said Cantwell. “This project is the natural evolution of a longstanding strategy of collaboration between myself, New Belgium and Oud Beersel.”

New Belgium stands to align with a couple of venerable and long-standing brands as it flexes its experimental muscles on Magnolia’s two brewing systems and ventures further into retail operations. The plan is to build an alliance that brings varied talent and experience to a
combination of old and new, not to turn Magnolia’s Haight Street and Dogpatch locations into New Belgium brewpubs. “Brewing With Friends” if you will. It is likely that much will seem unchanged in Magnolia’s tap lineup, even as new beers are developed and introduced, and over time, the fruits of more patient labors begin to appear.

“We’ve been looking for ways to diversify our assets and expand our community,” said New Belgium co-founder and Executive Chair, Kim Jordan. “These two tap rooms are right in the heart of historic San Francisco neighborhoods, a place Dick (Cantwell) and I call home. Magnolia makes excellent beer and plays an important role in the community. We’re excited about the possibilities and look forward to continuing our journey while honoring Magnolia’s history and presence.”

Belgian lambic producer Oud Beersel joins the partnership as a contributing experimenter, with the goal of eventually shipping containers of its traditionally-produced and spontaneously fermented beers for blending with Magnolia-crafted beers. Installation of a coolship is planned, along with the wooden aging vessels for which both New Belgium and Oud Beersel are known. To be called lambic the beer must be produced in Belgium, and by shipping lambic to San Francisco the world’s first dedicated lambic blendery outside of Belgium will be established. The project continues New Belgium’s blending work as embodied in Transatlantique Kriek, a beer produced over several years with Oud Beersel and Brouerij Boon, wherein beer was shippedfrom Belgium for blending with New Belgium wood-aged beers. New Belgium is also likely toship beer to San Francisco for blending from its Fort Collins, Colorado brewery.

Magnolia Brewing was established by McLean in 1997 at the corner of Haight and Masonic in San Francisco’s Haight-Ashbury district. Since then it has been a neighborhood institution filled by locals and tourists alike, serving artisanal pub food and producing a mainly English-style lineup of beers from a brewery in the basement. Magnolia has produced an array of awardwinning beers, headlined by Magnolia’s two top sellers, Proving Ground IPA and Kalifornia Kolsch, both of which have been distributed in cans since February of 2017. In 2014 it opened Smokestack, a barbecue restaurant attached to a 30-barrel production brewery, in the Dogpatch neighborhood of the city. Magnolia encountered financial difficulties in 2015 because of construction delays with Smokestack and slower than anticipated development in the neighborhood, which led the company to file for Chapter 11 bankruptcy protection in
November 2015.

“Magnolia has had quite a journey in San Francisco for nearly two decades, including some very challenging and difficult times in recent years,” said founder and brewmaster Dave McLean. “I’m incredibly grateful for this opportunity to see Magnolia start a new chapter and to be working with New Belgium, Dick Cantwell and Oud Beersel to preserve what we all love about Magnolia while embarking on some exciting new craft beer adventures together.”

The transaction, which is subject to customary closing conditions, is expected to close in September.

About Magnolia Brewing Company
Led by brewmaster and founder Dave McLean, Magnolia Brewing Company has been producing some of San Francisco’s most sought-after beers and dining experiences since 1997, when it opened its original Haight-Ashbury brewpub. It is known for its award-winning Britishinfluenced
and cask- conditioned ales and balanced, lower-alcohol session beers such as Bonnie Lee’s Best Bitter and SaraRuby’s Mild, as well as its flagship brands, Kalifornia Kölsch and Proving Ground IPA. Magnolia Brewing is committed to local and artisan sourcing and sustainability in brewery and restaurant operations, as well as the spirit of community formed around good beer and food. In addition to its two brewing operations, Magnolia operates  : Magnolia Gastropub, located at the Haight Street brewery, and Smokestack,
housed inside Magnolia Dogpatch’s 10,000 square foot production brewery.

About Dick Cantwell
Dick Cantwell is among the most well-respected and experienced craft brewers and international beer judges. Cantwell founded Elysian Brewing Company in 1996, where he served as head brewer until he left the company in 2015 after he was forced to sell to Anheuser-Busch InBev. During his tenure, Elysian was named Large Brewpub of the Year three times at the Great American Beer Festival® (1999, 2003 and 2004). In 2004, Cantwell received the Brewers Association’s Russell Schehrer Award for Innovation in Brewing. Additionally, he has written for various beer magazines, authored Barley Wine with Fal Allen; The Brewers Association’s Guide to Starting Your Own Brewery, Second Edition; Wood & Beer: A Brewer’s Guide with Peter Bouckaert and is currently at work on a forthcoming Brewers Publications title
about experimental IPAs, a spring 2018 release. Cantwell served as the Brewers Association’s Quality Ambassador, making presentations across the country at state guild conferences. He resides in Seattle, WA and San Francisco, CA.

About Oud Beersel
The Brewery Oud Beersel, which started in 1882, is located in Beersel at 10 km from the Brussels city centre, in the southwest of the capital. It is one of the last remaining authentic lambic breweries of Belgium and well known for its lambic beer brewed along traditional brewing methods. Due to the absence of succession in the family business at the end of 2002, the traditional lambic beers of Oud Beersel were threatened to disappear. Shocked by the loss of this cultural and historical patrimony, the brewery was taken over by Gert Christiaens in 2005 and business was restarted pursuing the principal aim to protect the time-honored lambic beers, as well as the cultural and historical heritage of Oud Beersel for the coming generations.

This traditional brewery of lambic beers is nowadays managed in a modern way with respect for tradition and the métier. The traditional part of the production process of the lambic beers, in particular the spontaneous fermentation, the maturation of lambic in wooden barrels andthe mixture of various lambic casks and vintages constitutes the core business of the company.