(Cape May, NJ) –  Cape May Brewing Company is pleased to announce a double release in their Barrel Aged Series. On Saturday, August 19, Phantom Crew and Higbee will release from their Brewtique at 1288 Hornet Road in the Cape May Airport. 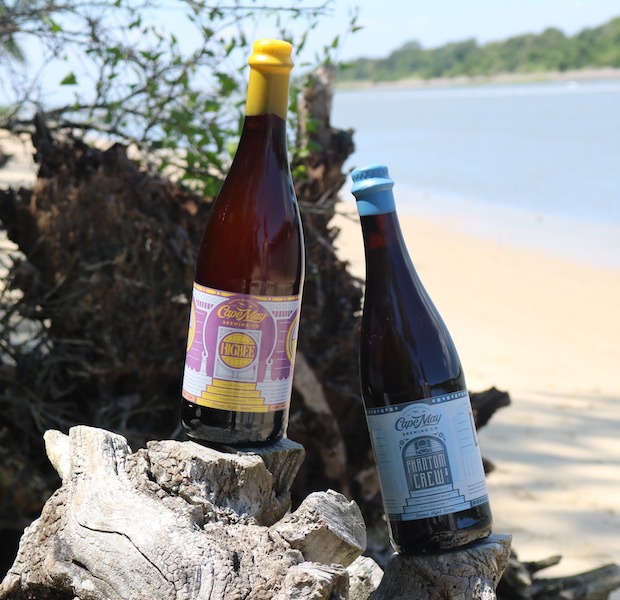 “Our Barrel Aged Series is really coming into its own,” says CMBC president and co-owner Ryan Krill. “With this double release, our fans can expect two brews that will change minds as to what a barrel-aged beer can be.”

Taking inspiration for names from the ghost stories that abound throughout Cape May, these next two releases are no different.

Higbee is named for Thomas Higbee, whose ghost is said to haunt the beach that bears his name. After leaving the family inn and farmstead to his niece, Etta, in his will, Higbee stipulated that he be buried on the beach, overlooking the view he so loved in life. Nonetheless, Etta moved his body to be interred with her at Cold Spring Cemetery, leaving behind his ornate grave.

Visitors to the beach report an “old looking” man who looks right through them, as if unaware that they exist. His apparition marked by the sound of children’s laughter, he’s of an odd color, a pale, glowing gray, dressed in tattered pants too short for his frame, a sash for a belt, and a t-shirt that had seen better days.

To honor Thomas Higbee, CMBC has brewed a Golden Sour, sharply acidic with a dry finish, the rustic funk in this iteration of their Barrel Aged Series is matched by a smooth vinous character. Aged for seventeen months, Higbee is blended to be well-rounded and approachable. Beer drinkers can expect fruity and acidic notes with undertones of red wine.

“I love how vinous this one has turned out,” says CMBC Director of Brewing Operations Jimmy Valm. “It’s very dry which really compliments the acidity, with some woodsy red wine notes from the long aging in first-use barrels, and at 10.1% drinks much like a wine as well.”

“Higbee shares a ton of similarities with a sparking white wine,” says CMBC Head Brewer Brian Hink. “It’s definitely a sipper — you’ll pour two glasses and over the course of an hour or so you will slowly sip away, noticing the depth of flavors as it warms and the carbonation dissipates.”

Phantom Crew takes its name from the WWII soldiers that haunt Battery 223, the bunker that lay unused at Cape May Point. The battery was one of three fortifications built for Fort Miles. Headquartered in Cape Henlopen, this fort was part of the now-abandoned Coastal Defense program.

The battery’s 6-inch guns were never fired on the enemy; nonetheless, two soldiers haunt the fortification. They’ve been seen sitting on top of the structure, smoking cigarettes, engaged in a barely-audible discussion.

With a harmonious blend of malt and acidity, a touch of funk and a tannic quality tying things together, Phantom Crew is very fruity up front while remaining reminiscent of the barrel’s past life.

The base of Phantom Crew is a Flanders-style Red Ale. Very well-rounded with a rich malt backbone and subtle fruity undertones, notes of plum and dates predominate in the finish. A hefty dose of Belgian candi rock sugar adds a sweet, almost molasses note to the background.

“The beauty of this beer going into the barrel was the residual sugar left at the end of primary fermentation,” says Hink.

“All of that residual sugar gives the bacteria more to play with,” says Valm, “and the long aging time gives them more time to play with it as well.”

“Many in our Barrel Aged Series had such unique flavors,” Hink says, “that if you sipped on a glass over an hour or so, rolling the beer around your tongue you’d notice all kinds of subtleties and nuances that weren’t there at the beginning. Phantom Crew has all of that and then some. The base beer going into the barrels was far more complex — probably our most complex base brew — which really comes through in the finished product.”

“We used these unique Belgian malts that are nutty and perfume-like with hints of dark fruits and toffee, so Phantom Crew is malty, but it’s also fruity,” Valm says. “It’s an acidic sour, sure, but it’s got a wide variety of fruits, raisins, plums, cherries, apricots, and a touch of candied apples, then there’s also a touch of these rustic notes like tobacco and leather, all along with a hint of wood.

“It will make your taste buds dance,” Valm says.

Higbee and Phantom Crew release from Cape May Brewing Company’s Brewtique at 1288 Hornet Road in the Cape May Airport on Saturday, August 19th, at 11am for $20 each.

For more information on Cape May Brewing Company, including for tours and tastings, see capemaybrewery.com or call (609) 849-9933.
###