(Kihei, HI) – Maui Brewing Company anticipates a major summer influx at their signature Kihei location this month due to the arrival of award-winning chef, Jojo Vasquez. After 13 years in the Hawaiʻi food scene, Vasquez brings his passion for cuisine to the standout Kihei brewery with powerful flavors and sophisticated presentation, all while utilizing the finest local produce. 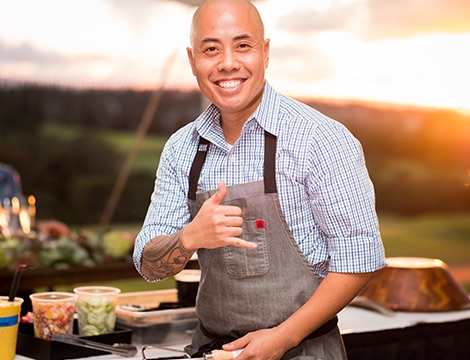 Vasquez is a Chicago native who initially found his culinary calling as a child, assisting his father with a family-run catering business serving Filipino, Chinese and American cuisine. He went on to study culinary arts at Kendall College’s Culinary Institute in Evanston, Illinois, after which he continued to develop his craft under the tutelage of acclaimed chef Troy Thompson. Following his time with Chef Thompson, Vasquez further honed his skill with Iron Chef Masaharu Morimoto, for whom Vasquez served as sous chef for two seasons on the hit show “Iron Chef”. Vasquez initially moved to and was married on Maui in 2004, where he thrived as chef de Cuisine for the Ritz-Carlton Kapalua Resort’s Banyan Tree Restaurant. He went on to open Morimoto Waikiki on Oahu as executive chef of the Morimoto team before returning to Maui to lead The Plantation House restaurant staff as executive chef.

Voted Maui No Ka ʻOi Magazine’s 2017 Chef of the Year by his peers, Vasquez has been a standout in the Hawaiʻi food scene for over a decade and shows no signs of arresting his momentum. His reputation as a purveyor of sustainable, artisanal cuisine caught the eye of Maui Brewing Company, and the newfound partnership offers him an exciting opportunity to bring that sensibility to Maui’s blossoming bar scene.

“I do everything based on the integrity of the ingredients and an eclectic method that uses as much fiercely local, sustainable avenues as I have,” he shares. Along with sustainability and locally sourced ingredients, the company’s dedication to artisan craftsmanship also goes hand-in-hand with his personal philosophy as a chef. “I want to make sure there’s craftsmanship in the touches and elegance in the plating,” he says. “I want to make sure people say ʻdamn, I need to come back because I didnʻt try the whole menu.”