(Holland, MI) — May 18, Dune Day, will mark this year’s launch of New Holland Brewing Company’s summer seasonal, Lost Dune Blueberry Ale. It will be available on draft and, for the first time, in cans. The cans feature new artwork that connect the brew to the classic experience of summertime in Michigan, with rolling lakeshore dunes and Michigan blueberries. 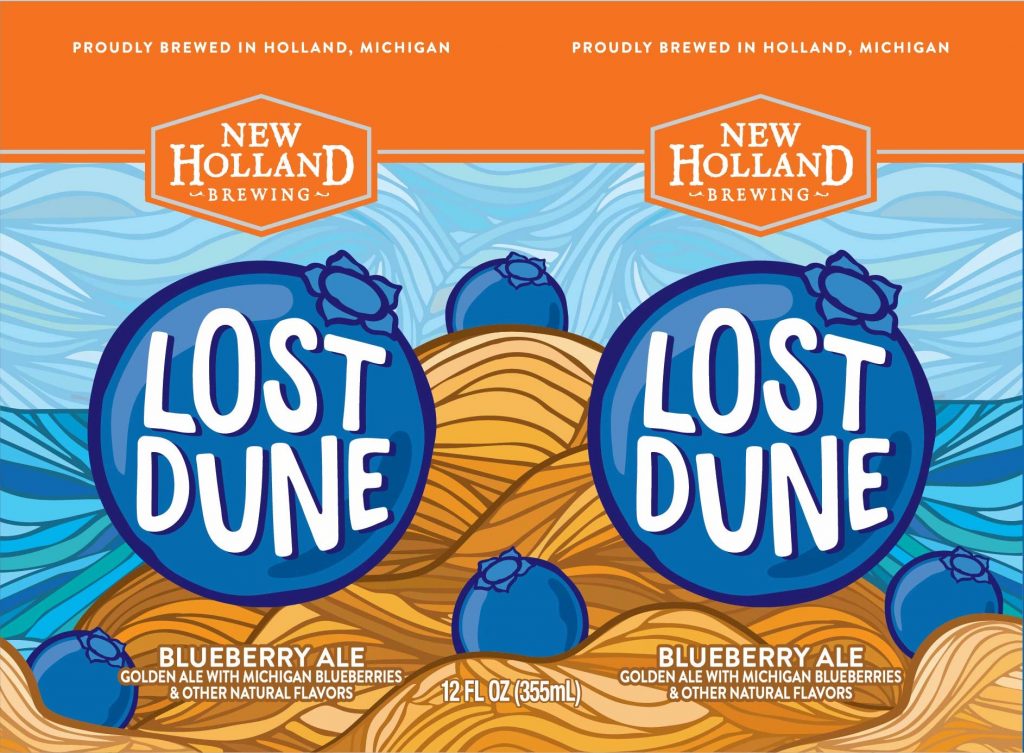 “Lost Dune is an awesome summer beer,” said Brewery Production Manager Jason Salas. “It’s a light and refreshing golden ale that appeals to the experienced craft enthusiast and serves as a great introduction to the scene for new-to-craft consumers. You’ll find complementary flavors and aroma from the Michigan blueberries and dank, fruity Mosaic hops, with that coriander spice as a surprisingly delicious way to finish it off. It’s great way to kick off the season.”

As part of the launch celebration, New Holland Brewing Company has partnered with the Land Conservancy of West Michigan to support the non-profit organization’s mission to permanently protect and care for Michigan’s natural beauty. Participating locations will be donating a portion of sales from each pint of Lost Dune sold on Dune Day to the Land Conservancy of West Michigan.

“Our production facility is just a few miles from Lake Michigan, and we recognize the importance of keeping the lakeshore and other natural areas in our state protected from development”, said Dominic Bergquist, National Events Manager for New Holland Brewing Company. “We’re excited to partner with the Land Conservancy of West Michigan with the launch of Lost Dune and help further their mission of keeping nature nearby.”

Fourteen Saugatuck, Holland and Grand Rapids bars and restaurants will be the first to tap Lost Dune on Dune Day. The New Holland crew will visit each location with swag and Lost Dune goodies between 3 and 9 p.m. to toast the start of summer.

Both New Holland’s Pub on 8th and The Knickerbocker will also host Dune Day parties featuring live music, a selection of blueberry-centric menu items and of course, Lost Dune on draft.

The Land Conservancy of West Michigan works with government bodies and private landowners to permanently protect and care for Michigan’s natural beauty, ensuring the land parcels it acquires are never developed so that they can be enjoyed for generations to come.

“Our natural spaces are something that we don’t want take for granted, but once they’re gone, they’re lost forever. We want to make sure that never happens,” Bergquist said.

“Our crew can’t wait to get out to some of our valued partners pub’s and help bring in summer with a few pints of Lost Dune, and help protect our region’s natural areas while we’re at it.” said Bergquist.

New Holland Brewing Company’s deep roots in the craft industry go back to 1997. Our role as an integral member of the artisan approach is something we take seriously, yet engage lightheartedly. We believe the art of craft lives in fostering rich experiences for our customers, through creating authentic beer, spirits and food while providing great service. Recognized for our creativity and artistry, our mission to improve the lives of craft consumers everywhere is seen in our diverse, balanced collection of beer and spirits.