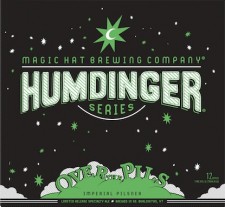 South Burlington, VT – Deep in the recesses of Vermont’s most unusual brewery, a new series of specialty ales is being developed. Throughout the winter months, experiments in ale were being carried out in secrecy at Magic Hat’s brewery. A little research, a little chaotic chemistry, and a little blind faith were combined with water, yeast, malts and hops to create the beginnings of one helluva series of big beers. But what to call such a series? A name was needed. A name that would convey the epicness of what the world was about to discover. A Dandy? No, too small. A Doozy? Too trite. A Ripsnorting Sockdolager? Too Suessian. Each beer in this series shall be dubbed…a Humdinger.

Taking Taste Buds Over the Pils, and Far Away

The first epic offering of the new Humdinger® series of specialty ales is an imperial pilsner aimed at satisfying even the most royal thirsts. Over the Pils – truly a real Humdinger of a pilsner – rules with a smooth malt body and is complemented by fruit and floral notes courtesy of copious amounts of Brewer’s Gold and Crystal hops. Beneath it all lies the sweetly satisfying warmth of 8.1% ABV and the crisp bite of 75 IBUs. Not to be overlooked, Over the Pils – and all other Humdingers – shall be carefully hand-filled in regal 750ml champagne bottles.

Go Big, or Go Drink Something Else

Like the greatest of kingdoms, each Humdinger is only around for a finite time at select locations, both bottled and on tap. Over the Pils will be available only from the first green grass of April until the first switches of Leo’s tail (April 1st to July 31st). In order to properly appreciate this special series, Magic Hat recommends swift procurement of all Humdingers before they vanish again within the darkened depths of the brewery. Use of the Sip Code Locator to find these rare beers is encouraged: www.magichat.net/sipcode.