(CINCINNATI, OH)  – MadTree Brewing, the first modern Ohio craft brewery to can their beer, is rolling out redesigned cans beginning in early March. The new cans are part of a branding evolution that focuses on the brewery’s purpose, vision, and values. The cans still retain original illustrations created by local artists and feature some unifying designs that make the cans unmistakably MadTree on the shelf. The year-round core lineup of cans is also being expanded with a new brand and a new packaging format. 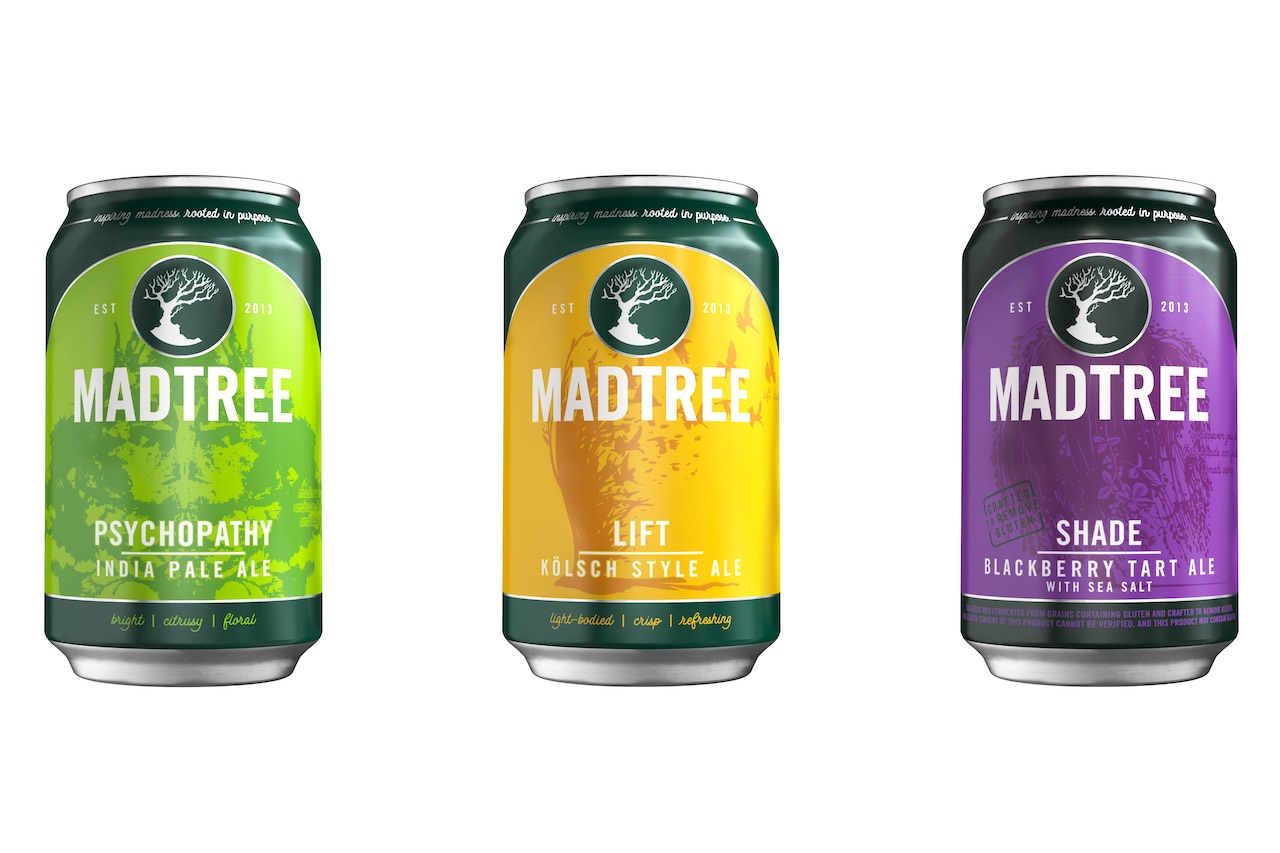 “The legacy can designs were unconventional and stopped consumers with their bold, bright designs when first launched,” said Emily Chapel, MadTree marketing director. “But the messaging and facing standards became confusing as the market has grown and become more crowded. The cans weren’t telling the MadTree story.”

MadTree conducted extensive consumer research and worked tirelessly to construct a new brand identity that better communicates their love for craft and community. Each can features an arch reminiscent of the large WWII-era airplane hangar that houses their production brewery. However, consumers told them loud and clear to keep the illustrations that made the original cans famous, so they will retain many familiar assets.

The brand evolution also introduces the tagline, “Inspiring madness. Rooted in purpose.” This captures MadTree’s mission to be continuously creative with a focus on quality while making sure the brewery is more than just a beer factory. They remain as committed as ever to being a vibrant community partner.

The portfolio of year-round core cans has also been expanded to include Shade blackberry tart ale and 12-packs of PsycHOPathy IPA. Shade was previously a summer seasonal favorite that is crafted to remove gluten and only 135 calories. PsycHOPathy has long been the flagship and best selling beer for MadTree with its bright, citrus, and floral flavors and aromas.

The new cans will first go on sale in the MadTree Taproom (3301 Madison Rd, Cincinnati, OH 45029) at their Winter Bonanza 6th anniversary party on Saturday, February 16. The new packaging will begin showing up on retail shelves in early March and new cans will be phased in throughout the year as seasonal offerings are released, including a number of new offerings not previously packaged before.

Cincinnati’s MadTree Brewing was founded in 2013 to cultivate a love of craft and community, and be the most respected brewery in the region. MadTree works hard to build camaraderie with their communities and supports countless charitable organizations throughout the year. They are obsessed with delivering the highest quality products and experience. MadTree believes in growing with integrity and intention and balancing long term sustainability in all decisions. They do this while never taking themselves too seriously. Everything is done to inspire madness, while being rooted in purpose. MadTree distributes its beers throughout Ohio, Kentucky, and Middle and Eastern Tennessee.