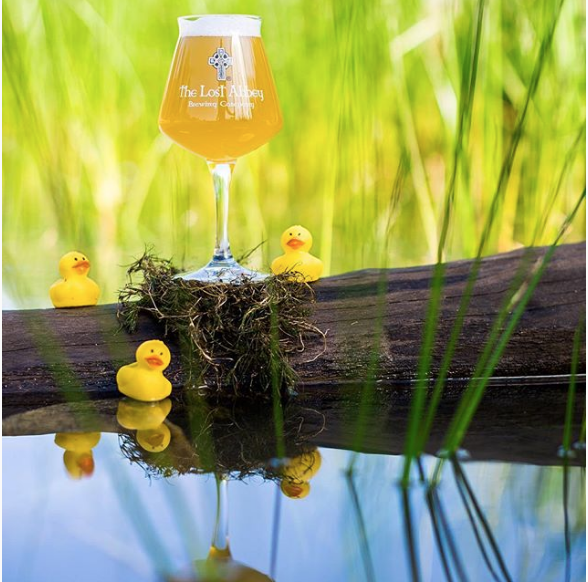 “We’re more than excited to release the third version of Duck Duck Gooze.” Said Tomme Arthur, COO and Co-Founder at The Lost Abbey. “Waiting for barrels to mature over the last three years has been a journey on its own, but the finished beer proves the wait was worth it.”

Starting Tuesday, July 26th at 12pm PT, beer lovers everywhere will be able to purchase up to 6 (six) bottles of Duck Duck Gooze at $41 per bottle (plus CA sales tax). There will be a total of 600 cases available split between the two sessions (300 cases reserved per session).

As in prior online sales, selling Duck Duck Gooze online will also come with a few restrictions. The main requirement being whoever purchases Duck Duck Gooze, must also be the individual to pick up the bottles… NO EXCEPTIONS. Removing the option of proxies will help get the beer to as many people as possible and will allow a smoother pickup process. Consumers who do not pick up their bottles during their designated pick up time will surrender the bottles back to The Lost Abbey and be issued a refund. A valid ID and will be required to pick up the purchased bottles. Any duplicate sales to the same name, email or credit card will be rendered null and void.

The sessions for retrieving purchased Duck Duck Gooze will happen on Saturday, August 27th and Sunday the 28th, from 10am to 5pm at The Lost Abbey Tasting Room in San Marcos. To reiterate – if a beer is purchased and not picked up during the designated pick up session, the beer will be surrendered back to the brewery and refunded. NO PROXIES ALLOWED

The link to purchase bottles will be released on Monday, July 25th at LostAbbey.com and across The Lost Abbey Social Media Network.

About Port Brewing / The Lost Abbey / The Hop Concept
Founded in 2006, Port Brewing and The Lost Abbey produce an extensive line-up of continental and American- inspired ales and lagers. Under the direction of visionary brewmaster and co-founder Tomme Arthur, the brewery has garnered dozens of awards including the 2007 Great American Beer Festival Small Brewery of the Year, The 2008 world Beer Cup Champion Small Brewery and the 2013 Champion Brewery at the San Diego International Beer Festival. The company’s beers, many of which are aged in oak barrels for 12 months or longer, are universally recognized for their complexity, unique flavors and bold boundary-pushing styles. For more information, contact Port Brewing / The Lost Abbey / The Hop Concept at 155 Mata Way, Suite 104, San Marcos, CA 92069, telephone (800) 918-6816, and on the web at www.LostAbbey.com