(San Diego, CA) – Coronado Brewing Company is releasing its latest version of Buster 4 IPA in honor of Lou Gehrig and in support of ALS research. The company joins 113 craft breweries from across 34 states to participate in the fourth annual Ales for ALS™, with proceeds benefiting the ALS Therapy Development Institute (ALS TDI). The ALS TDI’s mission is to discover and develop effective treatments and a cure for amyotrophic lateral sclerosis (ALS); there is currently no cure for the progressive neurodegenerative disease which affects 500,000 people worldwide. 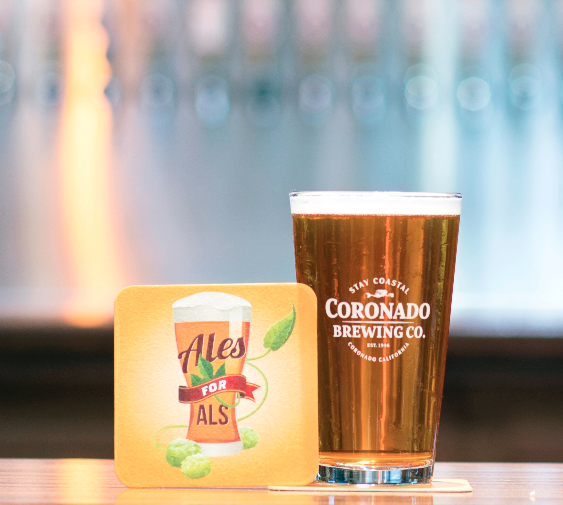 “We’ve participated in Ales for ALS™ since its inception, and we’re honored to be part of such a worthy cause,” said Ryan Brooks, Head Brewer, Coronado Brewing Company. Ales for ALS™ was created in 2013 by Loftus Ranches and YCH Hops, with the goal of uniting the craft brewing industry together to find a cure for ALS. Each year, breweries are offered an exclusive blend of hops, at no cost, to use in their Ales for ALS™ beers. The 2016 hop assortment is an artful mix of nine classic and experimental hop varietals.

“This year’s hop blend was really citrusy with tropical and stone fruit notes,” said Brooks. “We kept the grain bill simple so the hops could shine. We think fans will enjoy our latest version of Buster 4 IPA.” The donated hops were used in the mash, late kettle additions, and dry-hoping for a bright, citrus aroma and tropical fruit flavor. Buster 4 IPA comes in at 6.5% and 80 IBUs, with a lingering, dry finish.

The beer is currently on-tap at the company’s tasting room; $1 of each pint sold will directly benefit ALS research. The beer will also be featured alongside versions from 25 other breweries at this weekend’s third annual Ales for ALS™ event at Faction Brewing Company, in Alameda, CA.

The company’s involvement in Ales for ALS™ is part of an ongoing commitment to the community and humanitarian efforts. Coronado Brewing Company is a proud supporter of Ales for ALS™, Beer for Boobs, Pints for Prostate, Surfrider Foundation, and hundreds of local events across the country. Stay Coastal. Cheers.

About Coronado Brewing Company
In 1996, when craft beer was still a foreign term and San Diego County was home to only a handful of breweries, the Chapman brothers Ron and Rick opened a brewpub in their hometown of Coronado. Today CBC stays true to their San Diego roots, brewing abundantly hoppy West Coast-style ales, which are available today in 18 US states and twelve countries. In addition to the long-established pub in Coronado, the company opened a tasting room inside their newly built San Diego production facility in early 2013, and a tasting room and restaurant in Imperial Beach, California in 2014. Coronado Brewing Company was honored in 2014 with one of the brewing industry’s most prestigious awards-World Beer Cup Champion Brewery and Brewmaster for a Mid-size Brewing Company.