(Portland, OR) – Little Beast Brewing announced today that it will release three beers throughout the week–Country Wizard Brett Super Saison, Tree Spirit, and Midnight Riot. The first is Country Wizard, the brewery’s newest core beer, while Tree Spirit is a limited release mixed-culture beer fermented with cherries. The two will release on draft and in 375 mL bottles at the Little Beast Beer Garden in Southeast Portland beginning on Wednesday, June 26 at 5:00pm. Midnight Riot is also a cherry beer and will debut at the fourth annual Kriekfest on Saturday, June 29 at Von Ebert Brewing Glendoveer in NE Portland. 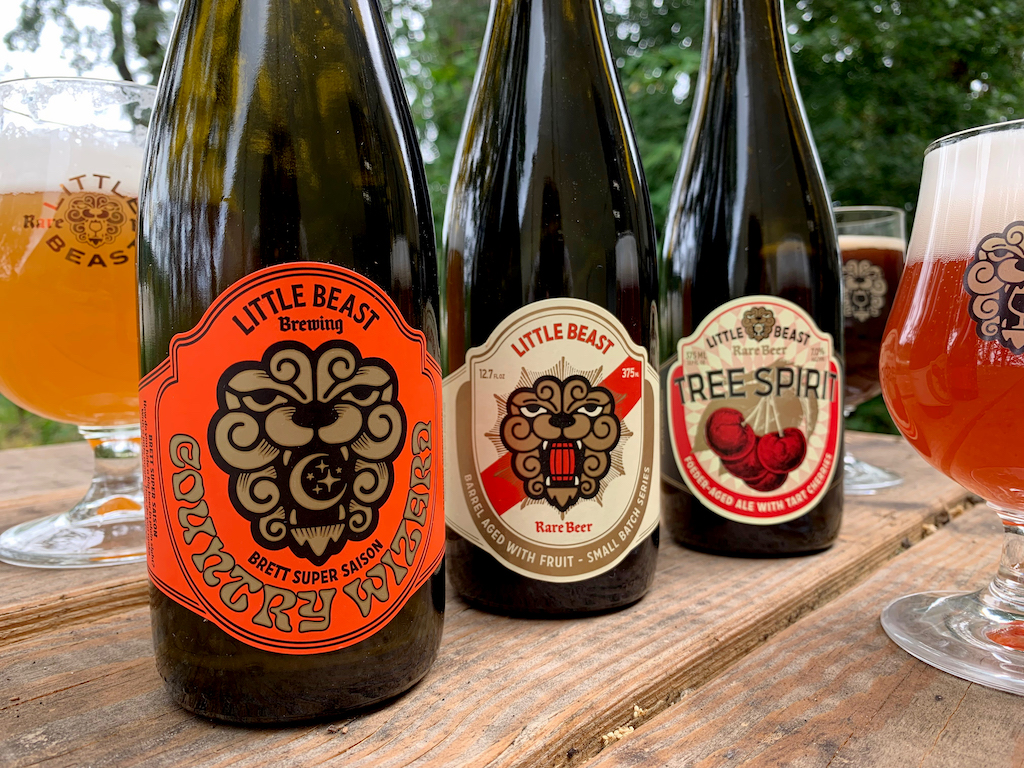 “We wanted to add a fourth beer to our year round lineup so we went with something quite a bit bigger than our other core beers,” said Little Beast founder and brewmaster, Charles Porter. “Country Wizard has a lot of ‘goodies’ to it—the fruity Brettanomyces character is louder, the body is bigger, the flavors are less subtle, yet the alcohol level is a bit deceiving. We’re very happy to have this beer around at all times moving forward.”

Tree Spirit is one of Little Beast’s most sought after annual release mixed-culture fruit beers. Inspired by Belgium’s famous Kriek beers, Tree Spirit is aged in a foeder for more than six months where it picks up a variety of microflora before being racked onto un-pitted, sour Montmorency cherries from Walkdale Farms in Dayton, Oregon. The beer sits on the cherries for 6 months before being transferred for additional aging. Tree Spirit is dominated with flavors of vanilla, marzipan, and vibrant cherry.

Midnight Riot is a dark, Imperial Bruin-style cherry beer brewed in collaboration with Oproer Brouwerij, a small craft brewery in Portland’s sister-city–Utrecht, Netherlands. Deep amber in color, the beer was brewed with Pilsner malt, wheat malt, oats, melanoidin, and Carafa malts, and was racked onto pitted cherries and aged for six months. The beer was then bottled and kegged and conditioned for six months in the package. The beer is first available to the public for Kriekfest on Saturday, June 29th, and will be available on draft and in limited bottles the next day at the Little Beast Beer Garden in SE Portland.

Founded by partners in life and work, Charles Porter and Brenda Crow, Little Beast is a family brewery with a passion for making great beer and sharing it with others. We craft wild, wood-aged, and blended beer naturally with diverse cultures, including Saccharomyces, Brettanomyces, Lactobacillus, and wild flora. By harnessing the little beasts that ferment our beer, we capture their untamed beauty and produce farmhouse beers that are diverse in flavor and rare in character.