(DALLAS/FT. WORTH,TX) – Two of North Texas’s favorite breweries, Rahr & Sons Brewing Company of Fort Worth and Lakewood Brewing Company of Garland, have joined together again to create a special, limited edition beer that combines their unique styles and reflects their joint dedication to local craft brewing. 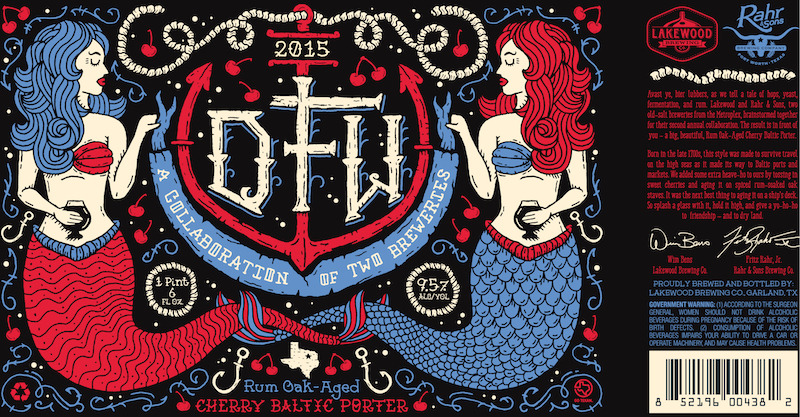 Coming after their successful partnership last year, the breweries have again created DFW: A Collaboration of Two Breweries. This year’s all-new version is a rum oak-aged cherry Baltic Porter with an ABV of 9.5 percent timed to celebrate North Texas Beer Week (November 6 – November 15).  DFW will be available on draft at area taps and will be sold at local retailers in 22 oz. bottles beginning the week of November 2.

“We’re excited to collaborate again with our friends at Lakewood on such a unique beer,” said Fritz Rahr, Co-Founder and CEO of Rahr & Sons. “Our special partnership represents the impressive growth of the North Texas craft brewing community in recent years.”

Collaboration beers, although new to North Texas, are popular elsewhere in the United States and around the world. DFW will be brewed at Lakewood’s facility in Garland this year, while last year’s version was brewed at Rahr & Sons in Fort Worth.

It’s a natural fit. Wim Bens, Founder of Lakewood Brewing Company, began his brewing career at Rahr & Sons, and the two breweries share a unique bond stretching back to Old World brewing techniques. Rahr brings a strong German background and almost 170 years of brewing tradition in his blood to combine with the passion of Belgian-native Bens. The result is a bold, unique porter sure to please local craft beer fans.

“Rahr and Lakewood have a shared history and a shared love of creating brews that are unique in North Texas. With DFW, we’ve done it again,” Bens said. “This collaboration allows us to showcase the best of both breweries in one amazing brew.”

Rahr & Sons has been featured in local and national media, including being named in the top 4 of the 20 best craft breweries in America by Time Out, as well as the Best Brewery/Distillery by Fort Worth, Texas Magazine for two years in a row. For more information, please visit www.rahrbrewing.com and www.facebook.com/rahrbrewing.

Lakewood Brewing Company produces internationally inspired, locally crafted beers. Its diverse varieties include year-round, seasonal, and small-batch brews including the Legendary and Seduction Series. Lakewood has been recognized nationally in major beer competitions and has brought home awards for many of their beers including: Gold for Saint Dymphna at 2015 US Open Beer Championship, Gold for Rock Ryder at both the 2015 San Diego Int’l Beer Festival and 2015 Los Angeles Int’l Beer Festival. Goatman was named the National Grand Champion at the 2014 US Beer Tasting Championships, and Lakewood was recognized as the second overall brewery in the 2015 US Open Beer Championship. Lakewood beers are available throughout the Dallas-Fort Worth area in discerning bars, restaurants, and select retailers; perfect for whichever neighborhood you call home. For locations and more information, please visit lakewoodbrewing.com.