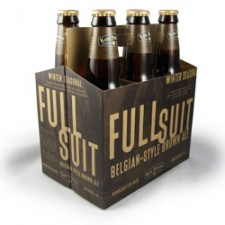 San Diego, CA – Here in San Diego, the nights are getting chilly and we’re almost ready to release our fall seasonal, Fullsuit Belgian Brown Ale.  This beer is our spin on a nutty and smooth brown ale, warm fermented with a Belgian yeast strain adding a spicy and peppery complexity.  Firm toasted malt and roasted nut flavors are underpinned by a hint of vanilla that comes from aging the beer on French oak.

We condition this beer on French oak chips, giving the finished beer a subtle vanilla and oak finish—it’s almost like a graham cracker in a glass.  Fullsuit Belgian Brown will be available across California in 12oz bottles and on draft, beginning November 1, through February, 2013.

About Karl Strauss Brewing
Karl Strauss Brewing Company has pioneered the San Diego beer scene since 1989 with innovative beer releases and award-winning favorites like Red Trolley Ale and Tower 10 IPA.  The company took home 23 medals in 2012 and is currently ranked #39 on the list of the country’s top craft breweries with sole distribution in California.  2013 is on pace to be another exciting year of double-digit sales growth, with the brewery opening to the public this spring and a new brewery restaurant slated for this fall.