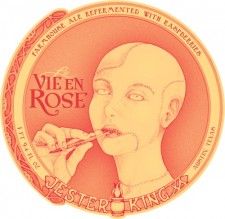 The principle behind La Vie en Rose is to obtain a second extraction of fruit flavor and aroma from the raspberries previously used to make Atrial Rubicite. We noticed that after we made our first batch of Atrial Rubicite, the raspberries still had a lot of nice flavor and aroma. We had also read the following on Brasserie Cantillon’s website, which mentions a second fruit extraction involved in making their Kriek:

“Two barrels of Kriek from the first extraction and two from the second are pumped into a huge barrel. (The second extraction is obtained by filling the barrel for a second time in order to extract as much from the fruits as possible).”

Based on this information, we experimented with aging a pale, medium-strength, farmhouse ale in a stainless steel tank with the raspberries previously used in the refermentation of Atrial Rubicite. Over the course of about two months, the beer picked up color, flavor and aroma from the raspberries, as well as flavor and aroma compounds produced by additional fermentation.

As we’ve mentioned before, we’re most interested in fermenting fruit in a manner similar to how grapes become wine, rather than simply adding fruit or fruit flavoring to filtered and/or pasteurized beer. The former technique has the ability to create new and interesting flavors and aromas through the wonderful process of fermentation, whereas the latter is less natural and quite predictable.

The total fermentation time for La Vie en Rose is approximately four months. During the first month, the beer was fermented with our house blend of brewer’s yeasts, Brettanomyces yeasts, naturally occurring wild yeasts native to our land in the Texas Hill Country, and souring bacteria prior to the addition of fruit. It then spent the next two months refermenting with raspberries, followed by a final month refermenting in bottles, kegs and casks. Like everything we brew at Jester King, La Vie en Rose was given lots of time so as to ferment to complete dryness. It finishes at 6.2% alcohol by volume, with a final gravity of 1.000, and a pH of 3.8.

“La Vie en Rose”, which literally translates to “life in pink” is common French colloquial phrase meaning, essentially, life as seen through rose-colored lenses. Our artist, Joshua Cockrell wrote the following about the name “La Vie en Rose” and its connection to his label art:

“It speaks firstly to a mainstream ignorance of viewing what progress has been made as a confirmation that the struggle for gender equality is over or nonexistent, i.e. viewing the current gender equality climate through rose colored lenses. The literal translation transmits the idea of containment of the female role in society, and on a larger scale the burden of gender and beauty constructs. The color pink itself is a great and obvious example of gender confinement. I love that while drinking this beer you have the physical experience of rose colored lenses giving you a reminder again to reflect on the topic.”