(Austin,TX) – When our tasting room opened on July 31st, we released two new beers: our Bière de Syrah and our third batch of Ambrée Farmhouse Amber Ale. Ambrée may have gotten a little lost in the excitement over a new wine grape refermentation, but at Jester King, we’re just as enthusiastic about this new simplified, scaled-down batch of Ambrée. 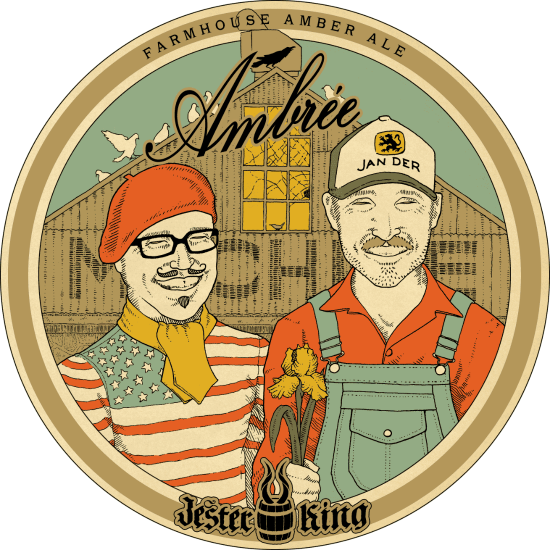 To be perfectly honest, Ambrée started out bearing the fingerprints of our early days as homebrewers. Back then, we attributed complexity largely to the sheer number of ingredients in a beer. If you want to make a beer complex and interesting, load it up with a bunch of different ingredients is what we believed. This mentality led to Ambrée being brewed with EIGHT different malts! It contained Munich, Two-Row, Pilsner, Carared, Amber, Crisp C-120, Melanoidin, and Roasted Barley.

As time has progressed here at Jester King, we’ve come to very much appreciate and subscribe to the principles of subtlety, simplicity, and restraint. We’ve found that some of the most beautiful and enjoyable beers really subscribe to these principles. More specifically, we’ve discarded the mentality that more specialty malts necessarily equate to complexity of flavor. In the culinary world, a few simple ingredients prepared well can be just as complex and elegant a dish made using a ton of specialty ingredients. We wanted Ambrée to reflect the same kind of refinement and balance.

Our initial inspiration for Ambrée came from some of our favorite farmhouse ales from French Flanders, notably the beers brewed by Brasserie Thiriez in Esquelbecq, France. But for the third batch, we looked much closer to home for inspiration: Live Oak Brewing Company in Austin. We’ve gotten to learn much from Live Oak during the last year or so while collaborating with them. Live Oak makes beautiful wort using very simple ingredients. For instance, for Kollaborationsbier they took one malt and worked with it using a technique called a decoction mash to create some of the richest, most delicious wort we’ve ever tasted. Decoction mashing involves separating out a portion of the mash, boiling it in the kettle, and then returning it to the mash tun.

For our third batch of Ambrée, we took inspiration from Live Oak and appreciation for subtlety, simplicity, and restraint to create a simple, amber farmhouse ale. We brewed it with three malts (Pilsner, Munich, and Vienna) instead of eight using a decoction mash. The wort was then fermented with our mixed culture of brewer’s yeast and native yeast and bacteria harvested from the air and wildflowers around our brewery. We also scaled down the gravity of Ambrée, which resulted in a lower alcohol by volume. Our third batch of Ambrée is 4.5% ABV, whereas before it was in the 7% range. We think this has lead to a more drinkable, enjoyable beer. We also believe Ambrée now has some nice symmetry as a middle ground between Le Petit Prince Farmhouse Table Beer and Commercial Suicide Farmhouse Mild.

Ambrée Batch 3 was brewed with Hill Country well water, barley, and hops. It was fermented in stainless steel for five weeks with our mixed culture, then naturally conditioned through refermentation in the serving vessel for another four weeks prior to release. It is unfiltered and unpasteurized. At the time of bottling, it had a finishing gravity of 1.002, a pH of 4.39, and was 25 IBUs. Ambrée is available on draught in our tasting room and in 750ml bottles, both in our tasting room and in stores throughout Texas.